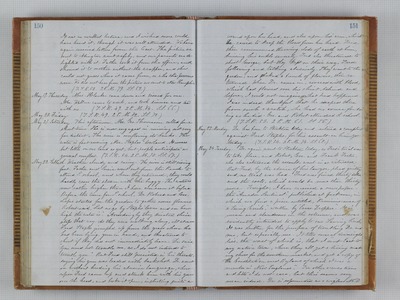 It was an excellent lecture, and I wished more could have heard it, though it was well attended. We have again received letters from the East. The picture we sent to Abington went safely, and our parents are delighted with it. Father took it from the office, and showed it to mother without the wrapper, and she could not guess where it came from, or who the persons were. We did not hear from the picture we sent to New Hampshire, (T.S.R. 50. 2 P.M. 79. S.S. 63.) May 19. Thursday. Mrs. Klouker came down and ironed for me. Mr. Wallace came to work, and took dinner and tea with us. (T.S.R. 49. 2 P.M. 84. S.S. 66.) May 20. Friday. (T.S.R. 49. 2 P.M. 82. S.S. 70.) May 21. Saturday. This afternoon, Mr. Geo. Thomason called for a short time. He is now engaged in mining not very far distant. The river is overflowing its banks. The water is fast covering Mr. Staples lowland. It comes but little on our land as yet, but people anticipate a general overflow. (T.S.R. 54. 2 P.M. 90. S.S. 67.) May 22. Sabbath. Weather cloudy and rainy. The river is still rising fast. Father and Susie went out from the Ranch to attend S. school, and when they returned, they could hardly cross the stream with the buggy. The water is now rather higher than I have ever seen it before. Before the time for S. school, Dr. Robert and Geo. Lepee started for the garden to gather some flowers. Robert said, "Let us go by Staples' levee and see how high the water is." Accordingly they directed their steps that way. As they were walking along, all at once Fred. Staples jumped up from the grass where he had been lying, gun in hand, and threatened to shoot if they did not immediately leave. Dr. said, "You need not trouble me, as I do not intend totrouble you." But Fred still persisted in his threats, saying his gun was loaded with buckshot. Dr. went on without heeding his abusive language, where upon Fred came up and struck him with his gun over the head, and broke it open, inflicting quite a wound upon his head, and also upon his arm, which Dr. raised to keep the blows from his head. Fred then commenced throwing clods of earth at him, bruising his ankle severely. Fred also threatened to shoot George, but they kept on their way, Fred following and talking abusively. They went to the garden, and picked a bunch of flowers, then returned. When Dr. came in, covered with blood, which had flowed over his shirt, behind and before, I could not imagine what had happened I was indeed thankful that he escaped thus from such a wretch, who had no excuse for doing as he did, Geo. and Robert attended S. school. (T.S.R. 53. 2 P.M. 61. S.S. 56.) May 23. Monday. Dr. has been to Stockton today and entered a complaint against Fred. Staples, for his assault on him yesterday. (T.S.R. 54. 2 P.M. 74. S.S. 62.) May 24. Tuesday. Dr. again went to Stockton today, as Fred's trial was to take place, and Robert, Geo. and Frank Foster, who also witnessed the assault, went in as witnesses. But Fred, by the advice of his lawyer, plead guilty, and no trial was had. Fred was fined thirty dollars, and the costs, which would be more than thirty more. Tonight, I have received a news paper - the "Amador Sentinel" published at Jackson, in which we find a piece entitled, "Reminiscence of a Sewing Circle," written by "Eaves - Dropper." It is mean and slanderous in the extreme, and was evidently intended to apply to our Sewing Circle, It was written for the purpose of troubling Dr. and me, but especially me. It tells several downright lies, the worst of which is, that I "sent East to my native town, where they all yet a living making shoes for the southern market, and got a copy of the Constitution and Bylaws of which I was a member in New England." For other accusations and hilts I do not care, but this seems very mean indeed. Dr. is represented as a wigless M.D.