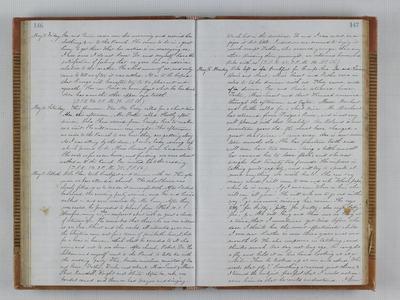 May 13. Friday. Geo. and Susie came over this morning and carried her clothing, etc. to the Ranch. She seems to be in a great hurry to get there. What her motive is in marrying so, I am sure I do not know. Dr. and myself have the satisfaction of feeling that we gave her no advice relative to the matter, She asked none of us, and only came to tell us after it was settled. It is to be hoped that George will hereafter try to be pleasant and agreeable. How can Susie so soon forget what he has done? Ada has now the other upper eye tooth. (T.S.R. 54. 2 P.M. 78. S.S. 68.) May 14. Saturday. This forenoon, Rev. Mr. Curry called for a short time. Also, this afternoon, Mr. Foster called. Shortly after dinner, Bela Shaw arrived from Camps Sero to make us a visit. He will remain over night. This afternoon we rode to the Ranch to see how they are getting along. As I was sitting by the door, I saw a lady coming up which proved to be Miss Smart from Sacramento. She rode as far as our house, and finding we were absent walked on to the Ranch. Geo. invited her to the wedding. (T.S.R. 54. 2 P.M. 75. S.S. 64.) May 15. Sabbath. Bela Shaw took breakfast and dinner with us. This afternoon we have attended church. The schoolhouse was closely filled, so as to render it uncomfortable. After S. school had closed, the wedding party arrived, and Geo. and Susie walked in and were married by Mr. Curry. After they were seated, he proceeded to preach from Heb. 12. 1. "Wherefore, seeing we also are compassed about with so great a cloud of witnesses," etc. He remarked that those who are our witnesses are God, Christ and the world, all interested as we run the Christian race, not for a crown of perishable laurel, but for a home in heaven, which shall be awarded to all who win, and not to one alone. After church, Robert, Dr. the children and myself went to the Ranch to take tea with the wedding party. This, besides ourselves, consisted of Geo. and Susie, Father, Uncle and Aunt, Miss Smart & Messrs. Shaw, Ramsdell, Wright and White. After tea, cake was handed round and then we had prayers and singing. Uncle led in the devotions. Dr. and I were so sad, we enjoyed it but little. Indeed no one seemed to enjoy it much except Father, who seemed younger than any other. Bidding them good-night, we returned home, and Bela with us. (T.S.R. 45. 2 P.M. 84. S.S. 66.) May 16. Monday. Bela left us after breakfast for Camps Sero. Geo. and Susie. Uncle and Aunt, Miss Smart and Father were invited to take dinner with us. They came, and after dinner, Geo. and Susie returned home. Father, Miss Smart and Aunt Hannah remained through the afternoon and to tea. Messrs. Merchant and Butler called for a short time. Mr. Merchant has returned from Frazer's River, and is not very well pleased with that locality. Bro. Roland is now seventeen years old. He must have changed a great deal since I came away. Ada is now seventeen months old. She has fourteen teeth and will soon have two more. Being a little unwell has caused her to lose flesh, and she now weighs but twenty two pounds. She improves in talking quite rapidly, and will try to speak almost anything we wish her to. She can say many words, will come to me and ask "Where papa", when he is away, If I answer, "Where is he", she will say "all gone". She will ask me to go out in this way, "go mamma", raising her voice. She says "titty" for kitty, "pitty" for pretty, also says" baby", "pie", etc. She will hug and kiss me so long at a time, that I sometimes get tired before she does. I think her the most affectionate child I ever saw. Luther is now three years and one month old. He also improves in talking, and thinks much. One day not long ago, he caught a fly and held it in his hand looking at at a while. Then he looked up at me and asked, "Who made that fly?" Something occurred joist them, & I turned the subject, fearful that I could not answer him so that he could understand. I know