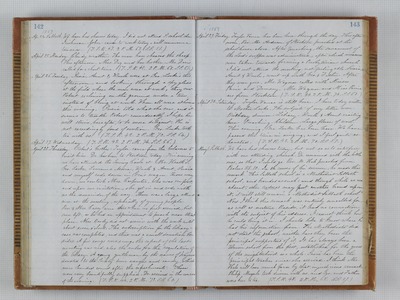 1859. Apr. 24. Sabbath. We have had showers today. I did not attend S. school. An Irishman - John - came to work today - will commence tomorrow. (T.S.R. 47. 2 P.M. 63. S.S. 51.) April 25. Monday. Cloudy weather. The men have sheared the sheep. This afternoon, Mrs. Day and her brother - Mr. Davis called for a short time. (T.S.R. 45. 2 P.M. 68. S.S. 61.) April 26. Tuesday. Susie, Aunt & Uncle were at Geo. Locke's this afternoon, and looking through a spy glass at the field where the men were at work, they saw Robert reclining on the ground under a tree, instead of being at work. When all were at home this evening. Susie told what she saw, and it seems to trouble Robert considerably. I hope he will strive, here after, to be more diligent. He is not exceedingly fond of exertion. Geo. Locke took tea with us. (T.S.R. 42. 2 P.M. 70. S.S. 64.) April 27. Wednesday. (T.S.R. 43. 2 P.M. 74. S.S. 56.) April 28. Thursday. Robert's brother - Taylor came from the Calaveras to visit him. Dr. has been to Stockton today. This evening we have attended the Sewing Circle at Mr. Heath's. Geo. Locke, Lawrence Moore, Uncle & Aunt, Susie and myself rode down in Geo.'s wagon. On our way down, we overtook Mrs. Carpenter, who was on foot, and upon our invitation, she got in and rode with us the remainder of the way. There was a large attendance at the meeting, especially of young people. Rev. & Mrs. Curry were there when we first arrived, but soon left, as he had an appointment to preach near that place. Mrs. Boody did not arrive with the work until about seven o'clock. The subscription for the library - case was completed, and there was a small donation besides. A few songs were sung, the report of the last meeting was read, also the rules for the regulation of the library. A young gentleman by the name of Wagner donated to the Society some oranges and candy, which were handed sound after the refreshments. These were very bountifully supplied. Dr. arrived in the course of the evening. (T.S.R. 44. 2 P.M. 71. S.S. 60.) 1859. April 29. Friday. Taylor Vance has been here through the day. This afternoon, Rev. Mr. Anderson of Stockton preached at the schoolhouse above. After preaching, the sacrament of the Lord's supper was administered, after which measures were taken toward forming a Presbyterian church. I did not attend the meeting, not feeling able. Susie, Aunt & Uncle, went up with Geo. & Father. After they were gone, Mr. Wagner called with Misses Paine and Demsey. Mr. Waguer and Miss Paine are from Stockton. (T.S.R. 44. 2 P.M. 74. S.S. 60.) April 30. Saturday. Taylor Vance is still here. I have today written to Mother Locke. The subjects of my letter were - Birthday dinner - Library - Uncle & Aunt visiting here - Preaching - Children - Large fleece of wool. This evening, Geo. Locke has been here. We have passed the time in singing, and I feel quite exhausted. (T.S.R. 43. 2 P.M. 70. S.S. 57.) May 1. Sabbath. We have had showers today, but not so as to interfere with our attending church. Dr. remained with the little ones, so that I could go. Rev. Mr. Hale preached from Psalms 33. 12. In the course of his sermon, he made this remark. "This Sabbath school is a Methodist Sabbath school, and branded as such, and though while we are absent, other roderos may put another brand upon it, it will still remain a Methodist Sabbath school." Now I think this remark was entirely uncalled for, as well as untrue. Beside, it had no connection with the subject of his address. I cannot think how he could bring it in. I should like to know where he had his information from. The Methodists did not start the school, neither have they been the principal supporters of it. It has always been a Union school from the first, established for the good of the neighborhood as a whole. Susie has been the principal teacher since she arrived. I think Mr. Hale will lose much favor by that injudicious remark. Philip Megerle took dinner with us, and Geo. and Father were here to tea. (T.S.R. 48. 2 P.M. 68. S.S. 59.)