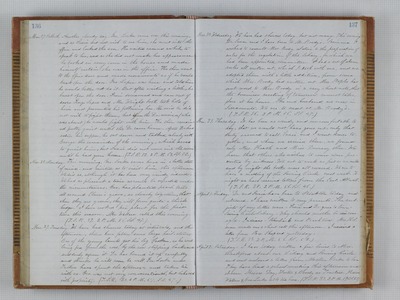 Mar. 27. Sabbath. Another cloudy day. Geo. Locke came over this evening, and as Susie did not wish to see him, she went into the office and locked the door. He waited around awhile to speak to her, and as she did not make her appearance he looked in every room in the house and made himself certain she was in the office. He then went to the office door and made movements as if he would break open the door. Geo. Lepee was here and told him he would better not do it. But after waiting a little, he burst open the door. Susie screamed and ran out of doors. George Lepee and Mr. Wright both took hold of him and prevented his following her. He said he did not wish to fight them, but when the Dr. arrived (who was absent) he would fight with him. He then remained pretty quiet until the Dr. came home. After Dr. had eaten his supper, he sat down and talked calmly with George the remainder of the evening, which served to quiet him, but Susie did not come into the room until he had gone home. (T.S.R. 52. 2 P.M. 63. S.S. 53.) Mar. 28. Monday. This morning, Geo. Locke came here in a better state of mind, and invited us to visit him this afternoon. We did so, although it has been very windy indeed. We had as pleasant a time as could be expected under the circumstances. Geo. has planted peach trees all around Elmer's grave, so closely together, that when they are grown, they will form quite a thick hedge. I have cooked pie plant for the first time this season. Mr. Wallace called this evening. (T.S.R. 39. 2 P.M. 56. S.S. 47.) Mar. 29. Tuesday. We have had showers today at intervals, and this afternoon, there have fallen some large hail-stones. One of the young lambs got his leg broken, as he was being fed from the cow, by the cow stepping backward suddenly upon it. Dr. has bound it up carefully and think he will soon be well. Geo. Locke and Father have spent the afternoon and taken tea with us. Geo. was not very conversational, but behaved with propriety. (T.S.R. 30. 2 P.M. 51. S.S. 47.) Mar. 30. Wednesday. We have had showers today, but not many. This evening Dr. Susan and I have been to Mr. Boody's. Susie and I wished to consult Mrs. Boody relative to the preparation of rules for the regulation of the library, for which we had been appointed committee. I had a set of eleven rules all written out, which I took with me, and we adopted them with a little addition, from some which Mrs. Boody had written out. Mrs. Staples has sent word to Mrs. Boody in a very short note, that the business meeting of tomorrow cannot take place at her house. She and husband are now in Sacramento. We are to meet at Mr. Boody's. (T.S.R. 36. 2 P.M. 56. S.S. 47.) Mar. 31. Thursday. It has been so windy and uncomfortable today, that we would not have gone out, only that duty seemed to call. Susie and I went down together, and when we arrived there, we found only Mrs. Heath and Miss Demsey there. We learn that others who wished to come were prevented by sickness. We set to work as fast as we could and by night the books were all covered. We are to have a meeting of the Sewing Circle next week. Tonight we have received letters from the East. All well. (T.S.R. 38. 2 P.M. 56. S.S. 46.) April 1. Friday. Dr. and Susie have been to Stockton today and returned. I have written to my parents. The subjects of my letter were - Susie and Dr. gone to town - Sewing Circle Library - Why should mother be discouraged Indians - Rhubarb and Peach trees. Mrs. Holman made me a short call this afternoon. I received a letter from Mrs. Shepard yesterday. (T.S.R. 33. 2 P.M. 55. S.S. 52.) April 2. Saturday. I have today written a few lines to Mrs. Shackford about our Library and Sewing Circle, and sent enclosed a letter from Mother Locke to her. They have had a school meeting this afternoon and chosen Messrs. Day, Foster & Boody as Trustees. Messrs. Wallace & Geo. Locke took tea here. (T.S.R. 33. 2 P.M. 59. S.S. 55.)