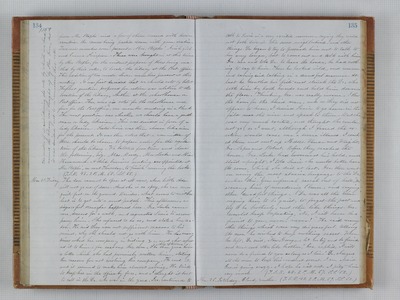 1859. from Mr. Staples' and a few of them covered with brown cambric, the corners being pasted down with gum arabic. Two new members were present, Mrs. Staples' Irish girl and Emma Simpson. These were brought in at this time by Mrs. Staples, for the evident purpose of thus being enabled by their votes, to locate the library at the Post office. This addition of two made eleven members present at this meeting. It was first decided that we should vote by ballot. The first question proposed for action was relative to the location of the library, whether at the schoolhouse or Post office. There were six votes for the schoolhouse and four for the Post office, one member sending in a blank. The next question was whether we should have a gentleman or lady librarian. This was decided in favor of a lady librarian. Sister Susie was then chosen librarian for the present. It was then voted that a committee of three should be chosen to prepare rules for the regulation of the library. We balloted four times and chose the following, viz. Mrs. Boody, Mrs. Locke and Miss Hammond. A third business meeting was appointed at Mrs. Staple’s, on next Thursday, to finish covering the books. The matter of re-considering the vote by which we had named the library was brought up by Mrs. Gove, but it was decided not to re-consider that vote. (T.S.R. 43. 2 P.M. 68. S.S. 58.) Mar. 25. Friday. The door cannot be open at all now, when little Ada will not go out of doors. And she is so spry, she can run quite fast on the ground. Besides, what seems to suit her best is to get into a mud-puddle. This afternoon, a disgraceful scene has happened here. Geo. Locke came over, dressed for a walk, and requested Susie to accompany him. She refused to do so, and stated her reason. He said they were not sufficient reasons to his mind, why she should not go with him. He has many times asked her company in riding, etc. and she refused it to him, for reasons her own. She then gave him this afternoon a letter which she had previously written him, stating her reasons for not wishing his company. He read it, and it seemed to make him almost raving. He tried to keep her in the office by force, and I thought it best to call in the Dr. who was in the yard. Geo, continued to talk to Susie in a very excited manner, saying they could not both live in the same neighborhood, and other things. Dr. began to try to persuade him not to talk to her any longer, but to come out and talk with him Geo, rose and told Dr. to leave the house, he had nothing to say to him. Then he looked wild, and commenced raving aid talking in a dreadful manner. At last he doubled his fists and struck the Dr, who took him by both hands and held him down on the floor. Thinking Geo. was really insane, I blew the horn for the hired men, and as they did not appear to hear, I desired Susie to go down in the field near the river and speak to them. But she was very much excited, and thought she could not go, so I went, although I feared the exertion would cause me a severe illness. I reached them and sent up Messrs. Vance and Wright, Geo. Lepee and Robert. Before they reached the house, Geo. Locke had loosened his hold, and stood upright. I told Susie she would better leave the room, which she did at last. Geo. Then went on using the most abusive language to the Dr. such as this, "You informal rascal out of hell," etc. accusing him of murdering Elmer, and saying other dreadful things. Dr. was all the time urging him to be quiet, to forget the past and try to be brotherly, and other like things. Geo. would keep repeating, "No, I will never be a friend to you, never, never! "He said many other things which were very disgraceful, telling the men he wished to keep nothing secret. When he left, Dr. said, "Now, George, let us try and be friends and treat each other like brothers. "Geo. replid," I will never be a friend to you as long as I live, "Dr. charged all the men to keep his conduct secret. I am afraid Geo. is going crazy. I hope he will not. I pity him very much. (T.S.R. 42. 2 P.M. 67. S.S. 62.) Mar. 26. Saturday. Cloudy weather. (T.S.R. 45. 2 P.M. 69. S.S. 60.)