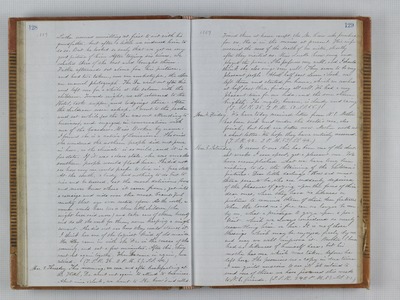 1859. Luther seemed unwilling at first to sit with his grandfather, but after a little we induced him to do so. But he looked so surly that we got no very good picture of him. After trying six times, we selected three of the best and bought them. Father afterwards sat alone for his picture, and had two taken, one an ambrotype, the other an enamel photograph. The Dr. went out after this, and left me for a while at the saloon with the children. Towards night, we all returned to the Hotel, took supper and lodgings there. After the children were asleep, I went to the parlor and sat awhile, (as the Dr. was out attending to business), and engaged in conversation with one of the boarders - Miss Booker by name. I found she is a native of Louisiana. She said she wondered the northern people did not pour in here, as the climate is so mild, and it is a free state. If it was a slave state, she was sure the southern people would flock here. She did not see how any one could prefer to live in a free state. At the south, a lady had nothing to do but to rise and be dressed, eat the most delicious food and never know where it came from, get into a carriage and ride over the most beautiful country that eye ever rested upon. At the worth, a woman would have two or three little children (she might have said more) and take care of them herself and do all the work for them, never keeping a single servant. She did not see hero they could stand it. I think her one of the laziest kind of old maids. Mr. Alley came in with the Dr. in the course of the evening, and sat a few minutes. After this, they went out again together. When Dr. came in again, we retired. (T.S.R. 36. 2 P.M. 61. S.S. 44.) Mar. 3. Thursday. This morning, we rose and after breakfasting at the Hotel, Dr. went out again to attend to business. About nine o'clock, we went to Mr. Crow's and called. 1859. Found them at home except the Mr. Crow who preached for us. He is in the mines at present. His wife received the news of the death of her sister, shortly after they visited us. Miss Loretta Crow sang and played the piano. She performs very well, and I should think she also sings very well. They seem to be very pleasant people. About half past eleven o'clock, we left them and started for home, which we reached at half past three, finding all well. We had a very pleasant time for our ride, and the sun shone brightly. The night, however, is cloudy and rainy. (T.S.R. 35. 2 P.M. 62. S.S. 56.) Mar. 4. Friday. We have today received letters from N. E. Mother has been sick and under the doctor's care, also Josiah, but both are better now. Mother wrote us a short letter. We hope they have entirely recovered. (T.S.R. 42. 2 P.M. 53. S.S. 44.) Mar. 5. Saturday. It seems to me this has been one of the shortest weeks I ever spent, yet a pleasant one. We have accomplished what we have long been wishing to do, the obtaining of the children's pictures. Dear little darlings! How sad must those parents be, who are suddenly deprived of the pleasure of gazing upon the faces of their dear ones, when they have no likeness or picture to remind them of their dear features. When the loved one's fore can no longer be seen by us, what a privilege to gaze upon a portrait, which we always considered so nearly resembling him or her. It is one of those blessings which may be enjoyed freely by us, and may we well improve it. Brother Elmer had us likeness of himself here, but his mother has one which was taken before he left her. She promises us a copy in due time. I am quite anxious to see it. We intend to send one of those we have procured this week to N. E. friends. (T.S.R. 34. 2 P.M. 53. S.S. 51.)