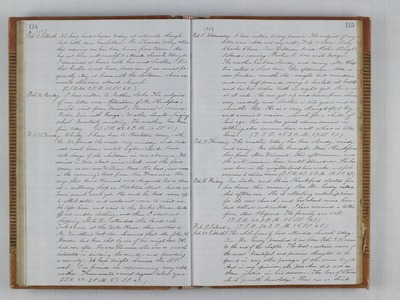 1859. Feb. 13. Sabbath. We have had showers today at intervals, though but little rain has fallen. Mr. Thomas Wiley called this morning on his way home from town. Ada has not been well enough to attend church today, so I remained at home with her and Luther. Now that Father is not here, some one of us must frequently stay at home with the children, when we would otherwise attend church. (T.S.R. 44. 2 P.M. 56. S.S. 48.) Feb. 14. Monday. I have written to Mother Locke. The subjects of my letter were. Situation of Mr. Shackford's ranch - visit from Miss S. Samuel S. arrived Father lives with George - Weather Lambs - Singing school - Quarterly meeting. The weather has been fine today. (T.S.R. 43. 2 P.M. 60. S.S. 51.) Feb. 15. Tuesday. Cloudy. I have been to Stockton today with Dr. We found the roads very muddy, and did not reach home until eight o'clock. Susie took charge of the children in our absence. We arrived in town about nine o'clock, and the first person we saw was William Read. He had just come in the morning's boat from San Francisco. He says that Aunt Hannah and Augusta have opened a millinery shop on Stockton street, but do not have much work yet. He said he had come up to collect debts, and could not come to visit us. We left him, and went to the Weber House, took off our muddy clothing, and then I went out shopping, while Dr. attended the land sale. Took dinner at the Weber House, then walked to Mr. Zab Allen's bookstore. Learned that Mr. John A. Benson had been shot by one of his neighbors. He died soon after. He was the man who was so much interested in dividing the county, and founding a new city. We have tonight received the N. E. mail. Our friends are experiencing very cold weather. Thermometer several degrees below zero. (T.S.R. 52. 2 P.M. 57. S.S. 49.) 1859. Feb. 16. Wednesday. I have written to my parents. The subjects of my letter were - Ada not very well - Trip to town - Busy Charles Chase - Saw William Read - Bela's thought. Roland's coming - Father L. lives with George. The weather has been cloudy and rainy. Mr. Chaplin called a short time this afternoon. Ada is now fourteen months old - weighs but nineteen and one-half pounds, owing to her late ill health and has but twelve teeth in sight yet. She is not at all well. She can get up and down from chair very readily now. Luther is two years and ten months old. He is a very thoughtful boy, and seems to reason much for a child of his age. He makes good advancement in talking, also remembers well what is told him. (T.S.R. 46. 2 P.M. 59. S.S. 51.) Feb. 17. Thursday. The weather today has been cloudy, windy, and rainy. Geo. Locke brought Miss Shackford here from Mrs. Vincent's this afternoon, and she will remain here until tomorrow. She has now been in the neighborhood two weeks, and feels anxious to return home. (T.S.R. 47. 2 P.M. 50. S.S. 49.) Feb. 18. Friday. Geo. Locke and Miss Shackford started for her home this morning. Rev. Mr. Curry called this afternoon. He is collecting subscriptions for the new church, and has about nine hundred dollars subscribed. I have received a letter from Mrs. Shepard. The family are well. (T.S.R. 40. 2 P.M. 56. S.S. 49.) Feb. 19. Saturday. (T.S.R. 34. 2 P.M. 56. S.S. 48.) Feb. 20. Sabbath. The whole family have attended church today. Rev. Mr. Curry preached to us from Eph, 3. 14 verse to the end of the chapter. The text contains some of the most beautiful and precious thoughts to be found in any other passage of the same length. And in my opinion, the preacher did not do them justice in his sermon. "The love of Christ, which passeth knowledge." How can we think