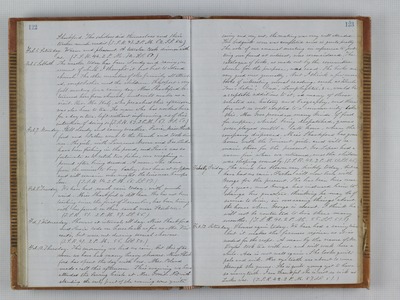 Shackford. The scholars did themselves and their teacher much credit. (T.S.R. 41. 2 P.M. 62. S.S. 54.) Feb. 5. Saturday. Warm and pleasant. A traveler took dinner with us. (T.S.R. 44. 2 P.M. 72. S.S. 60.) Feb. 6. Sabbath. The weather today has been cloudy and rainy, on account of which I thought it not best to attend church. The other members of the family all attended, except Father and the children. They report a very full meeting for a rainy day. Miss Shackford returned here from church, and will make us a visit. Rev. Mr. Hale, who preached this afternoon, was also here to tea. The man who has worked here for a day or two, left without informing no of his intention of doing so. (T.S.R. 53. 2 P.M. 61. S.S. 60.) Feb. 7. Monday. Still cloudy and rainy weather. Susie, Miss Shackford and Father went to the Ranch and took dinner. The girls, with Lawrence Moore and Geo. Looke have been fishing in the pond, and Susie was so fortunate as to catch two fishes, one weighing a pound after being dressed. A man, who came from the mines to buy barley, was here at supper, and will remain over night. He lives near Camps Sees. (T.S.R. 54. 2 P.M. 65. S.S. 57.) Feb. 8. Tuesday. We have had much rain today, with much wind. Miss Shackford is still here. She has not been teaching since the first of December, has been living with her parents on their ranch near Stockton. (T.S.R. 51. 2 P.M. 59. S.S. 56.) Feb. 9. Wednesday. Showers at intervals all day. Miss Shackford and Susie rode on horseback as for as Mr. Vincent's, but were out during several showers. (T.S.R. 49. 2 P.M. 56. S.S. 50.) Feb. 10. Thursday. This morning we had no rain, but this afternoon we have had many heavy showers. Miss Shackford has spent the day with us. Mrs. Poland made a call this afternoon. This evening we have attended the Sewing Circle at Mr. Gove's. Not with standing the early part of the evening was quite rainy and very wet, the meeting was very well attended. The bedquilt cover was completed and is quite pretty. The vote of our annual meeting in reference to putting our fund at interest, was reconsidered. The catalogue of books, as made out by the committee chosen for the purpose, was read. The books are very good ones generally, but I think a few more books of interesting moral reading, such as "Uncle Tom's Cabin," "Dred," Lamp lighter," etc. would be acceptable additions to it, as many of those selected are history and biography, and therefore not so well adapted to a community like this. Mrs. Gove provided many kinds of food for supper, which being dispatched, games were played until a late hour, when the company dispersed, Miss Shackford has gone home with the Vincent girls, and will remain there for the present. Geo. Lepee had a warm fire when we returned, and the children were sleeping soundly. (T.S.R. 42. 2 P.M. 51. S.S. 46.) Feb. 11. Friday. The wind has blown very briskly today, but we have had no rain. Father will now live with George for the present. He has been here nearly a year, and George has induced him to change his quarters, thinking he may be of service to him, in over seeing things about the house when George is absent. I think he will not be contented to live there many months. (T.S.R. 40. 2 P.M. 55. S.S. 51.) Feb. 12. Saturday. Showers again today. We have had a rainy time but it makes the farmers rejoice, as it is needed for the crops. A man by the name of Mr. Boyles took tea with us, and will work here a while. Ada is not well again. She looks quite pale and sick, Her eye teeth are about to come through the gums. She is quite young yet to have so many teeth. I am thankful she is not so sick as Luther was. (T.S.R. 42. 2 P.M. 57. S.S. 51.)