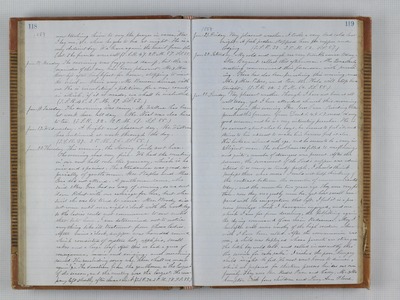 1859. now teaching him to say the prayer in verse, "Now I lay me," &c. when he goes to bed at night. He is a very obedient boy. We have again the mail from the East. The friends were well. (T.S.R. 47. 2 P.M. 57. S.S. 50.) Jan. 17. Monday. The morning was foggy and damp, but the remainder of the day has been pleasant. Mr. & Mrs. Crow left after breakfast for home, stopping to visit the school on their way. Mr. Benson dined with us. He is circulating a petition for a new county in which, if it is made, we shall be included. (T.S.R. 45. 2 P.M. 59. S.S. 53.) Jan. 18. Tuesday. The morning was rainy. Mr. Wallace has been at work here all day. Mr. Neal was also here to tea. (T.S.R. 52. 2 P.M. 61. S.S. 55.) Jan. 19. Wednesday. A bright and pleasant day. Mr. Wallace has continued at work through the day. (T.S.R. 39. 2 P.M. 56. S.S. 55.) Jan. 20. Thursday. This evening, the Sewing Circle met here. The evening was very fine. We had the meeting in our new hall over the granary, which is so nice and spacious. The attendance was good, especially of gentlemen. Mrs. Staples and Mrs. Gove did not attend. A gentleman came, who said Mrs. Gove had no way of coming, so we sent down Robert with our carriage for her, but she said she was too tried to come. Mrs. Boody did not come until near eight o'clock with the work bag, so the ladies could not commence to sew until that late hour. I am determined not to notice anything like ill treatment from those ladies. After nine o'clock, supper was handed round, which consisted of oysters hot, apple pie, small cakes and a large loaf. After this we had a game of consequence, music and singing, and marching sound. The concluding song was, "When shall we meet again?" &c. The donation from the gentlemen is the longest of the season, and the meeting was the largest. The company left shortly after eleven o'clock. (T.S.R. 34. 2 P.M. 58. S.S. 55.) 1859. Jan. 21. Friday. Very pleasant weather. I took a very bad cold last night. A fish pedlar stopped here for supper and lodging. (T.S.R. 32. 2 P.M. 62. S.S. 57.) Jan. 22. Saturday. My cold and cough are very trouble some today. Mr. Bryant called this afternoon. The Quarterly meeting commenced this forenoon with preaching. There has also been preaching this evening, and Mr. & Mrs. Peters, and Rev. Mr. Hale will stop here tonight. (T.S.R. 34. 2 P.M. 64. S.S. 55.) Jan. 23. Sunday. Very pleasant weather. Though I have not been at all well today, yet I have attended church this morning and again this evening. Rev. Isaac Owen. Presiding Elder preached this forenoon from Dent. 6. 4, 5, 6, 7. verses. A very good sermon, and he is a very interesting preacher. He is so earnest about what he says, he seems to feel it, and strives to his utmost to make his hearers feel it also. His locks are silvered with age, and he seems to be a very intelligent man. The schoolhouse was filled to overflowing, and quite a number of strangers were present. After the sermon, the sacrament of the Lord's supper was administered to as many as twenty people, I should think perhaps there were more. I could not help thinking of the contrast between the number of communicants today, and the number two years ago. They were very few then, now they are a goodly number, yet how small compared with the congregation that left. I feel it is a precious privilege which I have again enjoyed, and one which I am far from deserving, the fulfilling again the dying command of our resin Redeemer. May I here after walk more worthy of the high vocation where with I have been called. After the communion was over, a child was baptized whose parents are strangers. The little boy could talk, and called incessantly this the service for "cake, cake." I wished the poor, hungry child might be fed. We next went home to dinner, which we prepared for thirteen persons besides our own family. They were Rev. Messrs. Owen and Curry, Mr. & Mrs. Compton with four children and Lucy Ann Flood,