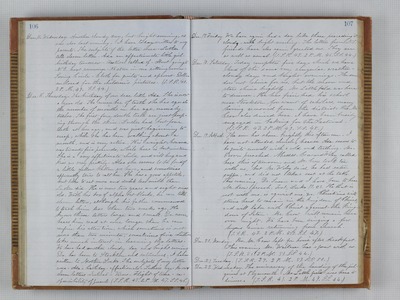 Dec. 15. Wednesday. Another cloudy day, but bright evening, as was also last evening. I have today - written to my parents. The subjects of the letter were - Luther tells eleven letters - Ada an affectionate little girl - birthday tomorrow - Festival talked of - About going to N. E. next summer - No stove in our sitting room - Sewing Circle - Cloth for quilts and aprons – Dollar enclosed for the children's pictures. (T.S.R. 40. 2 P.M. 49. S.S. 44.) Dec. 16. Thursday. The birthday of our dear little Ada. She is now a year old. The number of teeth she has equals the number of months in her age, namely, twelve. The first four double teeth are just keeping through the skin. Luther had but four teeth at her age, and was just beginning to creep, while she has been walking about a month, and is very active. His weight, however, was twenty five pounds, while hers is but nineteen. She is a very affectionate child and will hug and kiss us very prettily. Also she seems to be fond of a little yellow kitten we have, and sometimes apparently tries to call her. She has a good appetite, but likes to eat more and drunk less milk than Luther did. He is now two years and eight mos. old. With his box of alphabet blocks, he can tell eleven letters, although his father commenced to teach him less than two weeks ago. He knows those letters large and small. Dr. never hears him read at once longer than he can confine his attention, which sometimes is not more than two minutes, sometimes five. Luther takes much interest in learning the letters. We have had another cloudy day and bright evening. Dr. has been to Stockton and returned. I have written to Mother Locke. She subjects of my letter were - Ada's birthday - affectionate - Luther's age - knows eleven letters - Festival - Verses - Flight of time - responsibility of parents. (T.S.R. 43. 2 P.M. 47. S.S. 46.) Dec. 17. Friday. We have again had a day like those preceding it cloudy, with bright evening. The letters from N. E. friends have also again greeted us. They are as well as usual. (T.S.R. 43. 2 P.M. 46. S.S. 44.) Dec. 18. Saturday. Today completes five days which we have had of the same very singular weather - cloudy days and bright evenings. The sun does not shine for us, but the moon and stars shine brightly. Mr. Littlefield was here to dinner. He has finished his school near Stockton, for want of scholars, many having removed from the district. Rev. Mr. Crow also dined here. I have been busily engaged in baking for the Festival. (T.S.R. 43. 2 P.M. 49. S.S. 48.) Dec. 19. Sabbath. The sun has shone brightly this afternoon. I have not attended church, because Ada seems to be quite unwell with a cold and teething. Mr. Brown preached. Messrs. Crow and Wiley called here this afternoon, and Mr. Crow took tea with us, but Mr. Wiley said he had eaten supper, and did not take a seat at the table. This evening, Dr. Susan and I have been to hear Mr. Crow preach. Text, Luke 11, 23. "He that is not with me, is against me," &c. Christians will strive hard to remain in the kingdom of Christ, and will labor with Christ against the Kingdom of Satan. Mr. Crow will remain here over night. We have been singing a few hyms since returning from church. (T.S.R. 43. 2 P.M. 53. S.S. 47.) Dec. 20. Monday. Rev. Mr. Crow left for home after breakfast. This evening Mr. Wallace has spent with us. (T.S.R. 36. 2 P.M. 51. S.S. 44.) Dec. 21. Tuesday. (T.S.R. 39. 2 P.M. 57. S.S. 50.) Dec. 22. Wednesday. The anniversary of the landing of the pilgrims at Plymouth. Mr. Littlefield was here to dinner. (T.S.R. 41. 2 P.M. 49. S.S. 44.)