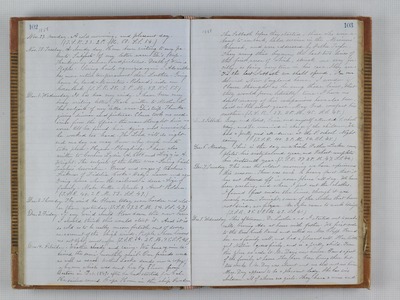 1858. Nov. 29. Monday. A cold morning, and pleasant day. (T.S.R. 33. 2 P.M. 60. S.S. 54.) Nov. 30. Tuesday. A cloudy day. Have been writing to my parents. Subjects of my letter were - Dr.'s trip - Thanksgiving dinner and pictures - Death of Winnie Staples - Sewing Circle organized again - Ada walks has more active temperament than Luther - Going home by land - Ministers - Roland's ride on horseback. (T.S.R. 38. 2 P.M. 59. S.S. 55.) Dec. 1. Wednesday. It has been very windy. I have been very busy writing letters. Have written to Mother L. The subjects of my letter were Dr.'s trip - Thanksgiving dinner and pictures. Elmer took no medicine from the office - the man thought him no worse till he found him dying and insensible he worked too hard - The Lord will do right - and one day we may know why such events take place - Hymn - Ploughing. I have also written to Cousins Lydia A. Cobb and Lizzie A. Wright. The subjects of the letter were - Sewing Circle Teachers' Association - Board and wages of teachers. Sickness of Fidelia Cooke - Baby's name and age. Going home when the railroad is done - Sige of family - Make butter - Uncle & Aunt Holden. (T.S.R. 40. 2 P.M. 53. S.S. 49.) Dec. 2. Thursday. The wind has blown today even harder and colder than yesterday. (T.S.R. 37. 2 P.M. 54. S.S. 47.) Dec. 3. Friday. If any wind would blow down the new barn I should think this would start it. And it is so cold as to be really uncomfortable out of doors, on account of the high wind. People whose horses are not tight, must suffer. (T.S.R. 34. 2 P.M. 48. S.S. 42.) Dec. 4. Saturday. Weather cloudy and rainy. We have again received the semi monthly mail. Our friends were as well as usual brother Locke sends me a copy of a hymn which was sent her by Elmer from Boston in Feb. 1849, after he had started for Cal. He sailed round Cape Horn in the ship Sweden, 1858. The Sabbath before they started, those who were about to embark, held service in the Maimers' Church, and were addressed by Father Taylor. They sung this hymn, the last two lines of the first verse of which, struck me very forcibly, as being very true in his care. They are "Tie the last Sabbath we shall spend," in our beloved New England home." I wonder if Elmer thought as he sung those lines, that they would prove literally true. I have no doubt many of his companions have also been laid in the silent grave. May God comfort his mother. (T.S.R. 33. 2 P.M. 45. S.S. 45.) Dec. 5. Sabbath. George and Robert, Susie and myself attended S. school today, and Dr. remained in charge of the children. We had a pretty good attendance at the S. school. Night rainy. (T.S.R. 40. 2 P.M. 54. S.S. 48.) Dec. 6. Monday. This is the day on which Father Locke completes his sixty second year, and Robert completes his sixteenth year. (T.S.R. 37. 2 P.M. 47. S.S. 44.) Dec. 7. Tuesday. This was the coldest morning we have experienced this season. There was such a heavy frost that it has not thawed off in some places all day. We have been washing, and when I put out the clothes, I found frost under the lines, though it was nearly noon. Tonight, some of the clothes that have not dried, are frozen. Mr. Tyler came to work tonight. (T.S.R. 25. 2 P.M. 43. S.S. 41.) Dec. 8. Wednesday. This afternoon, Dr. Luther and I started out to make calls, leaving Ada at home with father. We first rode to the Bear Creek Ranch and called on Mrs. Clapp. Found her and family well, and had a pleasant call. Her little girl Nellie grows finely, and is a pretty child. From this place we rode to Mr. Day's new house. Found a part of the family at home. They have been living there but two weeks. Mr. Day was absent and we did not see him. Mrs. Day appears to be a pleasant lady. She has six children, all of whom are girls. They have nice and