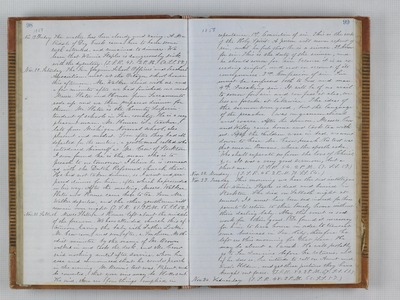 Nov. 19. Friday. The weather has been cloudy and rainy. A Mr. Riddle of Dry Creek came here to have some teeth extracted, and remained to dinner. We learn that Winnie Staples is dangerously sick with the dysentery. (T.S.R. 47. 2 P.M. 60. S.S. 58.) Nov. 20. Saturday. The San Joaquin School Officers' and Teacher's Association, met at the Octagon schoolhouse this afternoon. Mr. Walker dined with us, and a few minutes after we had finished our meal. Messrs. Slater and Horner from Sacraments rode up, and we then prepared dinner for them. Mr. Slater is the County Superintendent of schools in Sac. county. He is a very pleasant man. Mr. Horner is a teacher, late from Michigan Normal school, also pleasant and modest. Soon after they had all departed for the meeting, a gentleman called who introduced himself as Mr. Crow of Stockton. I soon found he is the man who is to preach to us tomorrow. I believe he is connected with the Dutch Reformed church there. He had not taken dinner, so I went and prepared dinner for him, after which he proceeded on his way. After the meeting, Messrs. Walker, Slater and Horner came here to tea. Soon Mr. Walker departed, and the other gentlemen will remain over night. (T.S.R. 51. 2 P.M. 66. S.S. 62.) Nov. 21. Sabbath. Messrs. Slater and Horner left about the middle of the forenoon. We have attended church this afternoon, leaving the baby with Father Locke. Mr. Crow came, and soon after, a Southern Methodist minister by the name of Mr. Brown walked in and took the desk, and Mr. Crow said nothing until after service, when he rose and announced that he would preach in the evening. Mr. Brown's text was," Repent, and be converted, that your sins may be blotted out." He said, there are four things implied in 1858. repentance. 1st. Conviction of sin. This is the work of the Holy Spirit. A person will never repent of sin, until he feels that he is a sinner. 2d Sorrow for sin. This is the duty of the sinner, and he should sorrow for sin because it is so exceeding sinful, and not on account of its consequences. 3rd. Confession of sin. Sin must be confessed both to God and man, 4th. Forsaking sin. It will be of no avail to sorrow for sin and confess it also, unless we forsake it likewise. The ideas of the sermon were good, but the language of the preacher was ungrammatical and coarse. After the sermon, Messrs. Crow and Wiley came home and took tea with us. After the children were in bed, we went down to hear Mr. Crow preach. His text was that verse in Romans, where the apostle asks, "Who shall separate us from the love of Christ," etc. It was a very good sermon, but a short one. (T.S.R. 54. 2 P.M. 67. S.S. 59.) Nov. 22. Monday. (T.S.R. 46. 2 P.M. 70. S.S. 64.) Nov. 23. Tuesday. This morning we hear the sad intelligence that Winnie Staples is dead and buried in Stockton. She died on Sabbath night at sunset. It must have been sad indeed for those parents to return to their lonely home without their darling baby. May this event so sad work for their good. Dr. found it necessary for him to leave home in order to transact some business in Sac. City, therefore he left us this morning for that place. He may be absent a week. He will probably go to San Francisco before he returns, and if he does so, he intends to call on Aunt and Uncle Holden, and get those pictures they have brought out for us. (T.S.R. 53. 2 P.M. 69. S.S. 61.) Nov. 24. Wednesday. (T.S.R. 48. 2 P.M. 60. S.S. 57.)