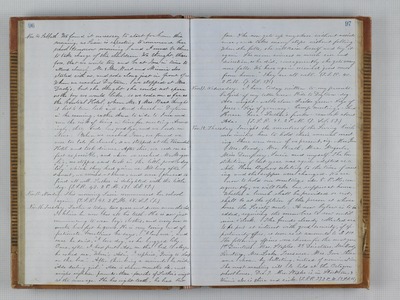 Nov. 14. Sabbath. We found it necessary to start for home this morning, as Susie is expecting to commence her school tomorrow morning, and I must be there to take charge of the children. We thought, therefore, that we would try and be at Ione in time to attend church. Mr. & Mrs. Burt and Minnie also started with us, and rode along just in front of us. When we reached Drytown, we stopped at Mrs. Doroty's, but she thought she could not spare us the boy we would like, so we rode on as far as the Central Hotel, when Mr. & Mrs. Burt thought it best to turn back and attend church in Drytown in the evening, rather than to ride to Ione and run the risk of being in time for meeting. Accordingly, they bade us goodbye, and we rode on alone. When we reached Ione, we found we were too late for church, so we stopped at the Verandah Hotel and took dinner. After this, we code on as fast as possible, and when we reached Mr. Megerle's, we stopped and took in the little poodle dog "lily" which they had given us. Not long after sunset, we arrived at home, and were pleased to find all well. Luther is delighted with the little dog. (T.S.R. 43. 2 P.M. 63. S.S. 59.) Nov. 15. Monday. This morning Susie commenced her school again. (T.S.R. 41. 2 P.M. 68. S.S. 61.) Nov. 16. Tuesday. Luther is today two years and seven months old. I believe he now has all his teeth. He is now just commencing to wear boy's clothes, and every one remarks how fast he grows. He is very loving and affectionate. Sometimes he says, "I love ma," and once he said, "I love dog", as he hugged lily. Once, after I had put Ada on the bed to sleep, he asked me, "Where's Ada", I replied, "Going to sleep on the bed". After thinking a minute he said, "Ada darling girl". Ada is eleven months old, and weighs eighteen pounds - three - fourths of Luther's weight at the same age. She has eight teeth, he had but four. She now gets up anywhere without assistance, and takes many steps without falling. When she falls, she will raise herself and try it again. She never evinces as much care and discretion, as he did, consequently she gets many more falls. We have again received "good news from home." They are all well. (T.S.R. 40. 2 P.M. 67. S.S. 59.) Nov. 17. Wednesday. I have today written to my parents. Subject of my letter were - Ride to Drytown – dog - Ada weight - walks alone - Fields green - Size of pears - Size of granary - Camp meetings - Send Horace here - Luther's frocks - remark about Ada. (T.S.R. 41. 2 P.M. 67. S.S. 59.) Nov. 18. Thursday. Tonight the members of the Sewing Circle were invited here to hold their annual meeting. There were seven of us present, viz. Mrs. Gove Mrs. Boody, Mrs. Heath, Mrs. Megerle, Miss Dempsey, Susie and myself. The Constitution of last year was again adopted as a whole. Those Bylaws relating to the time of meeting and the supper were changed. We are now to hold our meetings at. 5. P.M, consequently, we will take our suppers at home, whether a lunch shall be provided or not, shall be at the option of the person at whose house the Society meets. A new bylaw is to be added, requiring the members to sew until nine o'clock. The funds already collected are to be put at interest with good security, if opportunity offers, as soon as it amounts to $ 100. The following officers were chosen for the next year 1st Directress. Mrs. Staples. 2d Directress, Mrs. Boody. Secretary, Mrs. Locke, Treasurer, Mrs. Gove. These were chosen by balloting, instead of nomination. The next meeting will be held at the Octagon schoolhouse, Dec. 9. Mrs. Staples is in Stockton, & Winnie also is there and sick. (T.S.R. 37. 2 P.M. 63. S.S. 56.)