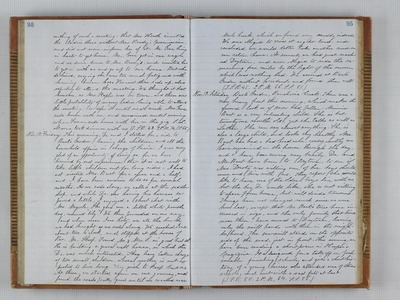 nothing of such a meeting - that Mrs. Heath invited the ladies there without Mrs. Boody, permission, and did not even inform her of it. Mr. Gove being in haste to get home, Mrs. Gove got in our wagon and we drove down to Mrs. Boody's, and invited her to get in with us and go up to our house. But she declined, saying she was too much fatigued with cleaning house. Cora Vincent then rode up, also expecting to attend the meeting. We thought it best, however, as Mrs. Staples was in town, and there was little probability of many ladies being able to attend the meeting, to defer it until next week. Mrs. Gove rode home with us, and remained until evening, when Susan rode home with her in the gig. S. L. Moore took dinner with us. (T.S.R. 42. 2 P.M. 74. S.S. 66.) Nov. 12. Friday. This morning, Dr. and I started for a ride to Burt's Garden, leaving the children and all the house hold affairs in charge of Susie. I was very glad of an opportunity of doing so, for we have learned by sad experience that it is not well to take little children out for long rides. I had not visited Mrs. Burt for a year and a half, and I have been anxious to do so for several months. As we rode along, we called at the saddle shop, and while Dr. was laving his harass repaired a little, I enjoyed a short chat with Mrs. Megerle. She gave me a little white poodle dog, named "lily." We then proceeded on our way, and when near Ione City, we ate the lunch we had brought as we rode along. We reached Ione about two o'clock, and stopped at the house of Rev. Mr. Sharp. Found Mr. & Mrs. S. in good health. He is building a gravel wall house, in which the Dr. was much interested. They have taken charge of two small children, whose mother is not expected to live long. They wish to keep but one. At three, we started again on our journey, and found the roads pretty good until we reached near Mule Creek, which we found very muddy indeed. We were obliged to cross it eight time, and concluded we would better take another rood on our return home. At sunset, we had just reached Drytown, and were obliged to ride the remaining four miles by the light of the moon, which was nothing bad. We arrived at Burt's Garden without accident, and found them well. (T.S.R. 45. 2 P.M. 66. S.S. 61.) Nov. 13. Saturday. Burt's Garden, Rancharea Creak. There was a very heavy post this morning, which makes the ground look as if snow had fallen. Minnie Burt is a very interesting child. She is but twenty one months old, yet she talks as well as Luther. She can say almost anything. She is also a large child, and looks very healthy. Mrs. Burt has had a bad headache, consequently we have remained in the house through the day, and I have been sewing very busily. Dr. and Mr. Burt have been to Drytown, to see if Mrs. Doroty was willing one of her boys should come and live with us. They report she would like to have one of the older boys live with us, but the boy Dr. would like, she is not willing to spare from home, but will decide tomorrow. Things have not changed much since we were here last, except that Mr. Burt's trees have increased in size, and the only family that lived near them, have moved to Drytown, leaving only the mill hands with them in the neighborhood. The saw will stand on the opposite side of the road, just in front. This evening, we have been reading a short poem in Harper's Magazine. It is designed for a take off on fashionable finishing schools, and gives a short history of a young heiress who attended one of these schools, and met with a sad fate at last. (T.S.R. 50. 2 P.M. 64. S.S. 56.)