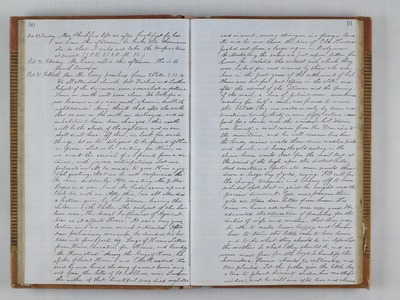 Oct. 29. Friday. Mrs. Shockford left us after breakfast for her own home. This afternoon, Dr. broke the thermometer, so that I could not take the temperature at sunset. (T.S.R. 51. 2 P.M. 73.) Oct. 30. Saturday. Mr. Curry called this afternoon. He is to preach tomorrow. Oct. 31. Sabbath. Rev. Mr. Curry preached from 2 Peter. 3. 13. 14. We all attended church but Father and Luther. Subjects of the discourse were somewhat as follows. Time on earth will soon close. "We look for a new heavens and a new earth, wherein dwelleth righteousness." Many think that after the works that are now on the earth are destroyed, and its inhabitant have been changed, this earth will be the abode of the righteous, and no sin shall dwell here. "If then, we look for such things, let us be diligent to be found of Him in peace." Let us be waiting for Him, as we await the arrival of a friend from a distance, with joyous anticipations. Let our preparations all be made to give Him a joyful greeting, that we be not surprised tho' he come suddenly. After meeting, Mr. & Mrs. Rogers and son, and Mr. Cady came up and took tea with us. After this, we all attended a lecture, given by Col. Warren, leaving the children with Father. The subject of the lecture was," The horal Influences of Agriculture as it affects Home." It was a very good lecture and we were much interested. After some preliminary remarks, he divided his lecture into four parts, viz. "Songs of Home Letters from Home, Education for Home, and Beautify the Homestead." Among the Soregs of Home, he spoke of "Sweet Home" and "Old Hundred." He said he once heard the song of "sweet home" rung out from the bells of St. Albans, near London the author of that beautiful song died neglected and in want, among strangers, in a foreign land. He said he once heard the true of "Old Hundred" pealed out from a large organ in Belgium. As illustrating the value we put upon letters from home, he related the interest with which they were looked for and received by those who were here in the first years of the settlement of Cal. There were but few post offices in the state, and after the arrival of the steamer and the opening of the mail, a line of patient men, sometimes reaching for half a mile, was formed to receive the letters. They were waited on only by turn, and sometimes twenty, thirty or even fifty dollars were paid for a chance near the window. Col. Warren was himself, a mail carrier from San Francisco to the mountains, and he well remembers how the hardy miners would throw down cradles, picks and shovels, and leaving the gold resting in the sluice-boxes, would start for the mail tent at the sound of the bugle upon the distant hills. And sometimes a fortunate man would throw down a large bag of gold, saying, "I'll call for the change tomorrow," and hurry off to some secluded spot, that in quiet he might read the precious document. Yes, more precious than gold are these dear letters from home. His views on home education were very good. He advocated the education of females for the duties of wife and mother, that they may be able to make home happy, and know how to train the little ones to love home, and to be what they should be in life. Let the mothers be what they should be, and we never need fear for the boys. To beautify the homestead, flowers should be cultivated and trees planted. Set the father give the little boy a tree to plant himself under his mother's window, and he will ever after love and cherish