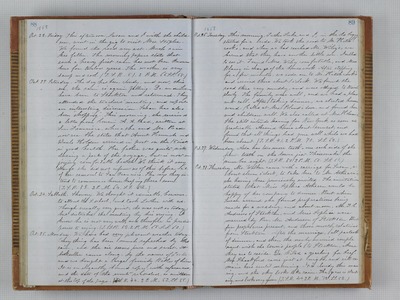 1858. Oct. 22. Friday. This afternoon, Susan and I with the children, went in the gig to visit Mrs. Staples. We found the road very wet. Much rain has fallen. The morning papers state that such a heavy first rain has not been known here for twelve years. The weather is very damp and cool. (T.S.R. 51. 2 P.M. 65. S.S. 58.) Oct. 23. Saturday. The day has been cloudy, and now, this eve, the rain is again falling. Dr. and Susan have been to Stockton and returned. They attended the teachers' meeting, and report an interesting discursion. Susan has also been "shopping." This morning, she received a letter from Cousin A. A. Read, written at San Francisco, where she and Mr. Read now are. She states that Aunt Hannah and Uncle Holden arrived in port on the 15 inst. in good health. Her father was quite sick during a part of the voyage, but is now enjoying comfortable health. We think it very strange she did not inform us of this before i, e. of her removal to San Francisco. She says they intend to commence house keeping there soon. (T.S.R. 53. 2 P.M. 64. S.S. 62.) Oct. 24. Sabbath. Showery. We thought it advisable, however, to attend the S. school, and took Luther with us. Though usually very quiet, he was not so today, but disturbed the meeting by his crying. I know he is not very well, and therefore is predisposed to crying. (T.S.R. 52. 2 P.M. 68. S.S. 60.) Oct. 25. Monday. We have had very pleasant weather today. Every thing has been much refreshed by the rain, and the air seems pure and sweet. A bookseller came along by the name of Foster, and we bought a large family Bible of him. It is an elegantly bound copy, with references, and the date of the events recorded, is written at the top of the page. (T.S.R. 44. 2 P.M. 63. S.S. 58.) 1858. Oct. 26. Tuesday. This morning, Father Locke and I, in the old buggy started for a ride. We took the road to Mr. Hitchcock's, and when we had reached Mr. Wiley's, we learned that they have another little son. I called to see it. Found Mrs. Wiley comfortable, and Mrs. Blaney in charge of the housework. After stopping for a few minutes, we rode on to Mr. Hitchcock's and arrived there about 1 o'clock. We found the road there very muddy, and were obliged to travel slowly. The family were well, and we had a pleasant call. After taking dinner, we started homeward. Called at Mrs. Poland's door, and found her and children well, We also called at Mrs. Holman's She still intends leaving for New York, as soon as practicable. Arrived home about sunset, and found that all things had gone well while we had been absent. (T.S.R. 41. 2 P.M. 70. S.S. 62.) Oct. 27. Wednesday. Ada has two more teeth - one each side of the front teeth on the lower jaw. These make the number eight. (T.S.R. 50. 2 P.M. 68. S.S. 61.) Oct. 28. Thursday. Mr. Walker came with a carriage for Susan, about eleven o'clock, to take her to Mr. Athearn's, she having been previously invited. The invitation stated that Miss Sophia Athearn would be happy of her company to dinner. But when Susan arrived she found preparations being made for wedding, and about noon, Mr. F. C. Andrews of Stockton, and Miss Sophia were married by Rev. Mr. Anderson of Stockton. But few people were present, and those mostly relatives from Stockton. After the marriage, all partook of dinner, and then the newly married couple went with the town's people to Stockton, where they are to reside. Dr. killed a yearling for beef. Mrs. Shackford came just at night, and will remain here until morning. It is cloudy this evening, and the sky looks like rain. The grass is starting, and looks very green. (T.S.R. 44. 2 P.M. 72. S.S. 62.)