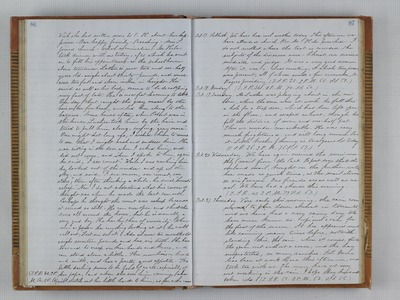 Wish she had written more to E. H. about her happiness – Our happy family - Preaching - Miss S. joined church - school examination. Mr. Hale took dinner with us today, after which he went on to fill his appointment at the schoolhouse above tomorrow. Luther is now two and one-half years old - weighs about thirty pounds, and measurer two feet and eleven inches in height. His mind as well as his body, seems to be developing very fast, of late. He is now fast learning to talk. One day Robert caught the gray mare by the hair on her fore head, and led her along to the harness. Some hours after, when Robert was in the house, Luther took him by the hair and tried to pull him along, saying, "gray mare." One night not long ago, I wished him to come to me that I might wash and undress him. He was sitting in the door when I asked him, and did not come, and when I spoke to him again he said," I see comet." While I was washing him he looked out of the window and up at the sky, and said, "I see moon, see comet, see stars," then after thinking a while, he said, "Comet's asleep," Now I do not understand what his course of thought was when he made the last remark. Perhaps he thought the comet was asleep because it seemed so still. He can now open and shut the doors all around the house, but he is usually a very good boy. He has his share of curiosity. When ever a person has anything looking at it, he will call out, "Let me see it." Ada is now ten months old weighs seventeen pounds and has six teeth. She has learned to creep on her hands and knees, and can stand alone a little. She now lives on bread and milk, and has a pretty good appetite. The little darling seems to be fond of us all, especially of her papa, and when she see him coming, she will stretch out her little hands to him, as far as she can. (T.S.R. 40. 2 P.M. 64. S.S. 60.) Oct. 17. Sabbath. We have had cool weather today. This afternoon we have attended church. Rev. Mr. Hale preached. I do not recollect where the text is recorded. The subjects of the discourse were - Christ, our saviour mediator and judge. It was a very good sermon. After it, was a class meeting, at which ten persons were present, all of whom made a few remarks, Mr. Rogers presiding. (T.S.R. 38. 2 P.M. 68. S.S. 62.) Oct. 18. Monday. (T.S.R. 34. 2 P.M. 74. S.S. 64.) Oct. 19. Tuesday. As Luther was playing about in the new barn, where the men were at work, he fell this a hole for a trap door, which had been left open in the floor, and escaped run hart, though he fell the distance of sever and one - half feet. This we consider remarkable. He was very much frightened, and will long remember it. Little brother Johnny is two years old today. (T.S.R. 36. 2 P.M. 76. S.S. 67.) Oct. 20. Wednesday. We have again received the semi-monthly mail from the East. Report says that the overland mail, brought on the Southern route has made as quick time, as the mail steamer via Panama. Our friends are as well as usual. We have had a shower this evening. (T.S.R. 40. 2 P.M. 79. S.S. 67.) Oct. 21. Thursday. Very early this morning, the rain commenced to four down almost in torrents, and we have had a very rainy day. We have never known so copious a rain for the first of the season. It has appeared much like raining many times before, not with standing this, the rain, when it comes, find the gram out without a cover, and the hay unprotected, on many ranches. S. L. Moore has been at work here this afternoon, and took tea with us. The men have got very wet working in the rain. I hope they have not taken cold. (T.S.R. 60. 2 P.M. 62. S.S. 56.)