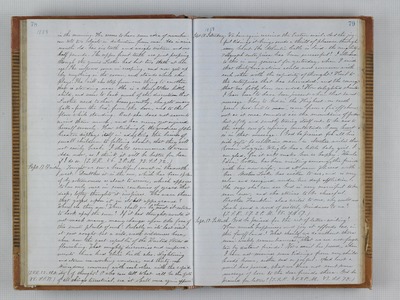 1858. in the morning. He seems to have some idea of number. can tell two objects in distinction from one. Ada is nine months old - has six teeth and weighs sixteen and one-half pounds. The upper front teeth are just peeping through the gums Luther had but two teeth at her age. She improves some in creeping, and now gets up by anything in the room, and stands while she plays. She will also step from one thing to another that is standing near. She is a thoughtless little child, and seems to lack much of the discretion that Luther used to show. Consequently, she gets many falls - from the bed, from the door, and to the floor while standing. But she does not seem to mind them much, and has never yet injured herself severely. How strikingly the goodness of the Creator displays itself in adapting the limbs of small children to falling about, that they will not easily break, I shall commence to wean Ada now, as I think it will be better for her if I do so. (T.S.R. 56. 2 P.M. 93. S.S. 72.) Sept. 17. Friday. Tonight we saw a beautiful comet in the northwest. Doubtless it is the one, which has been spoken of by astronomers as about to arrive, which appears to us only once in some centuries of years. What deep, lofty thoughts it inspires. Who were those that gazed upon it in its last appearance? Where are they now? Where shall we be when next it returns to look upon the sun? If it had thought, would it not mark many, many changes upon the face of this small planet of ours? Probably on its last visit, it saw sought but a wild, warts wilderness here, where now the vast republic of the United States is flourishing. What mighty discoveries and improvements have had their birth also. Lighting and steam are working wonders, and thirty-one kingdoms converse with each other with the rapidity of thought! (1 who can tell what will be the fate of all things terrestrial, ere it shall once again appear? (T.S.R. 53. 2 P.M. 88. S.S. 77.) 1858. Sept. 18. Saturday. We have again received the Eastern mail. And the joyful tidings it brings sends a thrill of pleasure through every heart. The Atlantic Cable is laid - the mighty Telegraph enterprise has been successful! I alluded to this in my journal for yesterday, when I said that thirty one nations could now converse with each other with the rapidity of thought! Hail to the enterprise that has succeeded, and the courage that has fitly been rewarded! How delighted should I have been to have been present when that sweet message. "Glory to God in the Highest - on earth peace - Good - will to men," came from a far off shore not as it once sounded o'er the mountains of Judas but softly and sweetly tracing itself out, to be read to the eager ears of a rejoicing multitude. O my heart is in that message. God be praised for all his rich gifts to rebellious man! - Mother writes that Cousin Lizzie Wright has a little baby girl. I am glad, for it will make her so happy. Uncle Edwin Cotton has been visiting among the friend with his new wife, and all seem pleased with her, Mother Locke has written to us, and is very calm and resigned under her deep affliction. She says she can see God is very merciful to her even now, and she strives to be cheerful. Brother Franklin also writes to me, why could not Sarah send a word of sisterly kindness to us? (T.S.R. 57. 2 P.M. 88. S.S. 69.) Sept. 19. Sabbath. God be praised for the art of letter - writing! How much happiness and joy it affords us, in this far-off land! What should we do without those semi-weekly remembrancers, showing that we are not forgotten by distant friends? Not a mail has passed, when I have not received some tidings from my childhood's home, either sad or joyful. And not a mail has passed, that we have not sent some message of love to the dear friends there. God be praised for letter! (T.S.R. 48. 2 P.M. 81. S.S. 73.)