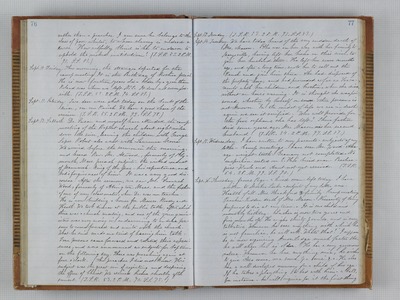 rather than a preacher. I am sure he belongs to the class of poor whites, to whom slavery is indeed a curse. How wilfully blind is he to endeavor to uphold the wicked institution! (T.S.R. 53. 2 P.M. 91. S.S. 81.) Sept. 10. Friday. This morning, the stranger departed for the camp meeting. It is the birthday of brother Josiah. He is now fourteen years old - older by a year than Roland was when we left N. E. It does not seem possible. (T.S.R. 55. 2 P.M. 94. S.S. 81.) Sept. 11. Saturday. Two deer were shot today on the bank of the river, on our Ranch. We have a good share of the venison. (T.S.R. 55. 2 P.M. 93. S.S. 78.) Sept. 12. Sabbath. Dr. Susan and myself have attended the camp-meeting of the Baptist church about eight miles down the river, leaving the children with George Lepee. Robert also went with Laurence Moore. We arrived before the sermon in the morning, and heard Rev. Mr. Atwood, formerly of Plymouth, Mass. preach - subject - the wicked conduct of Mannesseh - King of the Jews - his repentance, and God's forgiveness of him. It was a very good discourse. After the sermon, we saw Mr. Samuel Wood, formerly of Abington, Mass. and the father of one of my classmates, when Dr. was our teacher. He is now building a house for Messrs. Boody and Heath. We took dinner at the public table, after which there was a church meeting, and one of the young ministers was very noisy in endeavoring to induce persons to come forward and unite with the church. What he said made me tired of hearing him talk. Four persons came forward and related their experiences, and were announced as subjects for baptism on the following day. There was preaching again at four o'clock. The preacher I did not know. His subject was the great sin of rejecting and despising the offers of Christ. We arrived home shortly after sunset. (T.S.R. 53. 2 P.M. 90. S.S. 75.) Sept. 13. Monday. (T.S.R. 53. 2 P.M. 93. S.S. 81.) Sept. 14. Tuesday. We have today heard of the very sudden death of Mrs. Mason. She was on her way with her family to Marysville, having left her home on this river, to join her husband there. He left her some months ago, and after a long time, wrote her to sell out the Ranch and join him there. She had disposed of the property here, and had proceeded as far as Sacraments with her children and brother, when she died without an hour's warning. It is thought she was poisoned, whether by herself or some other person is not known. "In the midst of life we are in death," again we see it verified. Who will provide for the five orphans she has left? Their father died some years ago. Mr. Mason was her second husband. (T.S.R. 54. 2 P.M. 97. S.S. 87.) Sept. 15. Wednesday. I have written to my parents - subjects of my letter - Camp meetings - have seen Mr. Wood – Ada - age - weight - teeth - Granary not completed. No suspicion rested on E. H.'s hired man. Peachespies - Uncle and Aunt not yet arrived. (T.S.R. 54. 2 P.M. 99. S.S. 90.) Sept. 16. Thursday. James Page - a hired man - left today. I have written to Mother Locke - subjects of my letter were - Health of all - Mrs. Shackford & family - Camp meetings Peaches - Sudden death of Mrs. Mason - Necessity of being prepared to die at anytime. It is our children's monthly birthday. Luther is now two years and five months old. He weighs thirty pounds, and is very talkative. Whenever he sees anything with which he is not familiar, he will ask. "What's that?" I suppose he is now acquiring knowledge much faster than he will when he is older. He has a very generous nature. Whenever he has anything nice, he wishes to give "Ada some, ma some, fa some," etc. He also has a well developed memory for a child of his age. If he takes a play thing to bed with him - a ball, for instance - he will inquire for it the first thing