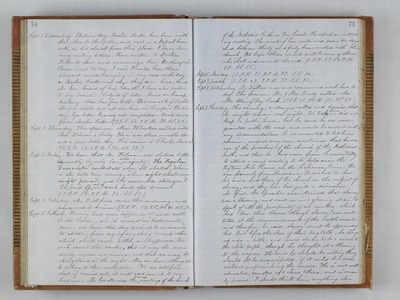 Sept. 1. Wednesday. Election day. Father Lock has been with the other to the polls, and east in a Republican vote, as did also all from this place. I have been busy writing letters. Have written to Mother Locke to cheer and encourage her. “Be cheerful”, Elmer used to say. I wish I could hear those pleasant words ringing in my ears each day, as Mother Locke now says they do in hers, since she has heard of his death. I have also written to my parents. Subjects of letter - Scene at Camp Meeting - Ada has four teeth - Dr.'s remark of Luther - "the fun sticks out all over him in lumps"- Election day - Eyer better - Granary not completed - Reid news from Mother Locke. (T.S.R. 64. 2 P.M. 98. S.S. 82.) Sept. 2. Thursday. This afternoon Mrs. Klonker called with Mrs. Holman's baby. He is now three months old and a fine little boy. His name is Charles Edward. (T.S.R. 60. 2 P.M. 95. S.S. 79.) Sept. 3. Friday. We learn that Mr. Holman was elected to the Assembly by only four votes majority. The "Regular Democratic " candidates were all elected. When is the better time coming, "when night shall over might prevail, and be accounted stronger?" Dr. paid off one of our work hands after dinner. (T.S.R. 59. 2 P.M. 90. S.S. 77.) Sept. 4. Saturday. Mr. Littlefield came this morning, and remained to dinner. (T.S.R. 59. 2 P.M. 90. S.S. 72.) Sept. 5. Sabbath. Having had some difficulty of words with Sister Susan, which caused us both much pain, we have this day resolved to endeavor to abstain from saying any thing to each other which shall came either unhappiness. We each record this resolve, that it may the more deeply impress our minds, and that we may be strengthened in the right. May we have strength to adhere to this resolution. We are satisfied, that if carried out, it will add much to our happiness. Dr. has attended the camp meeting of the church of the Methodist South, on Dry Creek. He reports an interesting meeting. The meeting has continued some ten days and between thirty and forty have united with the church. We hope these converts will be among those who "shall endure unto the end." (T.S.R. 57. 2 P.M. 83. S.S. 66.) Sept. 6. Monday. (T.S.R. 51. 2 P.M. 87. S.S. 74.) Sept. 7. Tuesday. (T.S.R. 49. 2 P.M. 89. S.S. 82.) Sept. 8. Wednesday. Mr. Wallace came and commenced work here today. This forenoon, Mr. & Mrs. Boody called - also Mr. Allen of Dry Creek. (T.S.R. 55. 2 P.M. 97. S.S. 82.) Sept. 9. Thursday. This evening, a stranger called and desired that he might remain over night. We told him we did not keep a public home, but he said he was unacquainted with the road and would be content with any accommodations. So we consented to let him remain, and we very soon ascertained that he was one of the preachers of the church of the Methodist South, and that he had come from Carson Valley to attend a camp meeting to be held near the Fifteen Mile House on the Calaveras River. He was formerly from Louisiana. Dr. wished to hear his views and those of his church on the subject of slavery, and they have had quite a discussion. At first, the preacher maintained that slavery was a blessing, and went on in a glowing strain to speak of all the prosperity of our country, which had been thus blessed though slavery was instituted at the commencement of the settlement, and therefore, he said, slavery must be approved of God. But before the close of their long talk, he changed sides a little, and owned slavery to be a curse to the white people, though he thought it a blessing to the negroes. He said he should be willing they should all be emancipated, if it could be done without impoverishing the owners. He is not well educated, smokes and chews tobacco, and in meanly dressed. I should think him anything else