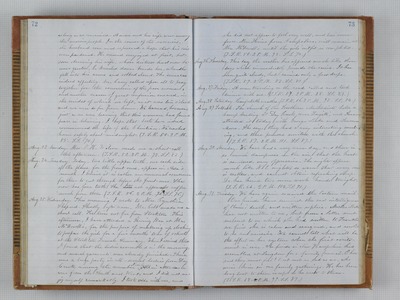 as long as we remained. A man and his wife were among the anxious people. In the course of the exercises, the husband rose and expressed a hope that his sins were pardoned. He seemed overjoyed at first, but soon observing his wife, whose distress had now become greater, he kneeled down beside her, when she fell into his arms and sobbed aloud. The scene was indeed affecting. Mr. Curry called upon all to pray together for the conversion of the poor woman, and another season of great confusion ensued, in the midst of which we left, as it was ten o'clock and we were so far from home. We learned, however, just as we were leaving that this woman had found peace in believing. I hope that both have indeed commenced the life of the Christian. We reached home safely about midnight. (T.S.R. 50. 2 P.M. 85. S.S. 70.) Aug. 23. Monday. Mrs. O. H. Wilson made me a short call this afternoon. (T.S.R. 52. 2 P.M. 93. S.S. 83.) Aug. 24. Tuesday. Today, two little upper teeth, one each side of the places for the front ones, appear in Ada's mouth. I believe it is rather an unusual occurrence for these to cut through before the front ones. She now has four teeth. She has not appeared to suffer much from them. (T.S.R. 56. 2 P.M. 95. S.S. 76.) Aug. 25. Wednesday. This morning I wrote to Mrs. Cynthia Shepard. Shortly after noon, Mr. Cobb made us a short call. He lives not far from Stockton. This afternoon, I have attended a Sewing Bee at Mr. McDowell's, for the purpose of making up clothing to prepare the girls for a five months' term of school at the Stockton Female Seminary. When I arrived there I found that the ladies assembled in the morning, and several garments were already finished. There was a large party in all - several ladies from Dry Creek among the number. Nearly all in attendance were from the South and West, and I did not enjoy myself remarkably. I took Ada with me, and she did not appear to feel very well, and has some fever. Mrs. Kime from Campo Seco, will remain at Mr. McDowell's until the girls' outfit is completed. (T.S.R. 50. 2 P.M. 92. S.S. 74.) Aug. 26. Thursday. This day the weather has appeared much like those days which immediately precede the rains. It has been quite cloudy, but rained only a few drops. (T.S.R. 59. 2 P.M. 83. S.S. 80.) Aug. 27. Friday. A man traveling on the road called and took dinner with us. (T.S.R. 57. 2 P.M. 88. S.S. 81.) Aug. 28. Saturday. Comfortable weather. (T.S.R. 56. 2 P.M. 93. S.S. 84.) Aug. 29. Sabbath. The church of the Southern Methodists hold a Camp Meeting at Dry Creek, near Fregitts', and Susan attended it today with George Locke and Lawrence Moore. She says they had a very interesting meeting, and three persons united with the church. (T.S.R. 57. 2 P.M. 101. S.S. 87.) Aug. 30. Monday. We have had a very warm day, and there is so much dampness in the air, that the heat is rendered very oppressive. The nights appear much like N. E. nights, so warm that everyone is restless, and cannot obtain refreshing sleep. Dr. has hired two more work hands tonight. (T.S.R. 64. 2 P.M. 102. S.S. 91.) Aug. 31. Tuesday. We have again received the Eastern mail. Our friends have received the sad intelligence of Elmer's death, and written replies. Mother Locke has not written to us, but from a letter sent enclosed to us which she had written to Franklin we find she is calm and resigned, and resolve to be submissive. We cannot tell what will be the effect on her system when the first excitement is over. The friends in New Hampshire had assembled at Langdon for a family funeral. O how sad they must feel! But not so sad as we, who miss him in our family gatherings. He has been long lost to them except as he wrote to them. (T.S.R. 68. 2 P.M. 99. S.S. 87.)