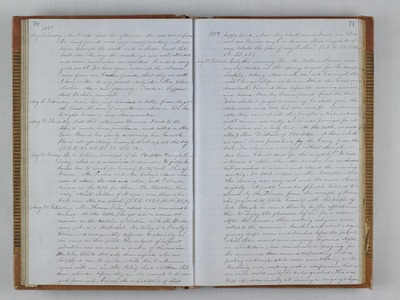 1858. Aug. 17. Tuesday. Mr. Flood called this afternoon. He was direct from the camp ground and says camp meeting will continue through the week and include next Sabbath also. He says the meetings are well attended and some conversions are reported. Success to every good work! We have again received the welcome news from our Eastern friends, that they are well. I have written to my parents - subjects - Mrs. Allen. Luther - Ada - new granary - Peaches - Saffron - Aunt Rachel's remark. Aug. 18. Wednesday. Susie has just received a letter from Augusta Read. No news of importance there in. Dr. has brought home a new thermometer. Aug. 19. Thursday. Late this afternoon Dr. and I rode to the store to make some purchases, and called on Mrs. Gove. Found her slowly recovering her health. She is not yet strong enough to sit up all the day. (T.S.R. 58. 2 P.M. 93. S.S. 74.) Aug. 20. Friday. Dr. C. Collins, principal of the Stockton Female Seminary, called and remained to dinner. We judge he knows how to speak for himself pretty well. This afternoon, Mr. Sanders and Mr. Curry's eldest son came to return the cows and calves, and I placed dinner on the table for them. The Stockton "Seminary" admits children of all ages - even those who have never attended school. (T.S.R. 56. 2 P.M. 86. S.S. 73.) Aug. 21. Saturday. Mr. Thomas Wiley called and remained to dinner. At the table, he got into a warm discussion on the doctrine of election, with Mr. Brakeman, who is a Methodist. Mr. Wiley is a Presbyterian, and consequently differed materially in his views on that point. The subject of infant salvation was also made a matter of discussion. Mr. Wiley thinks that only those infants who are baptized can be saved, while Mr. Brakeman agrees with me in the belief that all those children who die before they are old enough to discern good from evil, become the inhabitants of that 1858. happy land, where they shall never know sin. Did not our Saviour say, "in heaven their angels do always behold the face of my Father"? (T.S.R. 55. 2 P.M. 85. S.S. 68.) Aug. 22. Sabbath. Early this morning. Dr. Mr. Wallace, Susan and myself started in the spring wagon for the camp meeting, taking Ada with us, and leaving Luther with George Lepee at home. Robert also went on horseback. We arrived there before the morning service, and heard Rev. Mr. Lurner preach from the text, "What shall it profit a man, if he shall gain the whole world and lose his own soul," etc. A good sermon. After this, we went into Mr. Compton's tent, and sat until dinner was ready, which was provided for all who wished in a long tent. At the table, we met Mr. & Mrs. Wilkins of Stockton. A three o'clock, we again heard preaching by Mr. Curry from the text, "For when we were yet without strength, in due time Christ died for the ungodly," We had intended to return when this sermon was concluded but we wished to remain and attend the evening meeting. We took supper in Mr. Compton's tent. The evening was very cool and the moon shone brightly. A goodly number of people listened to a sermon by Mr. Tumer from the example of Moses- who preferred to unite himself with the people of God though he must there by suffer affliction, than to "enjoy the pleasures of sin for a season." After the sermon, those seeking religion were called to the mourner's bench, and about a dozen young people came and kneeled before the pulpit, while those around were singing hymns. After an exhortation, one commenced praying for the mourners, those around responding and repeating sentences, while some were talking to the kneeling ones, making such a confusion, that no one voice could easily be distinguished, This was kept up, occasionally all joining in singing a hymns