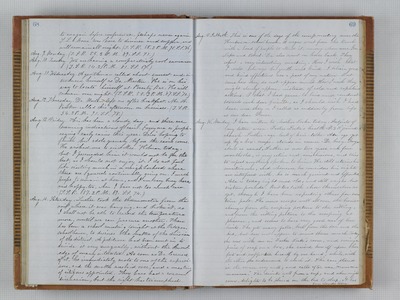 to us again before conference, perhaps never again. S. L. Moore was here to dinner and supper, and will remain all night. (T.S.R. 58. 2 P.M. 95. S.S. 76.) Aug. 9. Monday. (T.S.R. 55. 2 P.M. 89. S.S. 71.) Aug. 10. Tuesday. We are having a comparatively cool summer. (T.S.R. 54. 2 P.M. 81. S.S. 69.) Aug. 11. Wednesday. A gentleman called about sunset and introduced himself as Dr. Marten. He is on his way to locate himself at Poverty Bar. He will remain over night. (T.S.R. 58. 2 P.M. 87. S.S. 70.) Aug. 12. Thursday. Dr. Marten left us after breakfast. Mr. A. Parker called this afternoon on business. (T.S.R. 54. 2 P.M. 91. S.S. 78.) Aug. 13. Friday. This has been a cloudy day, and there are seeming indications of rain. Every one is prophesying early rains this year. Dr. is hoping to finish his adobe granary before the rains come. He wished me to visit Mrs. Holman today, but I persuaded him it would not be for the best, as I should not enjoy it. I do not feel like visiting much in a neighborhood where there are quarrels continually going on. I much prefer to remain at home, and I am very busy here, and happy, too, when I have not too much care. (T.S.R. 57. 2 P.M. 89. S.S. 74.) Aug. 14. Saturday. Luther took the thermometer from the nail where it was hanging, and broke it, so I shall not be able to record the temperature more, until we can procure another. There has been a school meeting tonight at the Octagon schoolhouse, to discuss the matter of the division of the district. A petition had been sent in to divide it very unequally, without the knowledge of many interested. As soon as Dr. learned of it, he immediately wrote to one of the supervisors, and the matter was laid over, and a meeting of citizens appointed. They have had a warm discussion, but the right has triumphed. Aug. 15. Sabbath. This is one of the days of the camp meeting near the Henderson schoolhouse. A wagon went from the Ranch with a load of people to attend it, among whom were Geo. Lepee and Robert. Dr. also went on horseback. They report a very interesting meeting. How I wish that I could always be gentle and kind. I believe good and kind affections are a part of my nature. But somehow they do not appear much. How I wish they might always appear, instead of cold and repulsive actions. O that I had grace, to live and conduct towards each dear friend, as I should wish I had done, were they or I called as suddenly from life as our dear Elmer. Aug. 16. Monday. I have written to Mother Locke today. Subjects of my letter were - Father Locke's health - F. &. S. joined church - Luther - age - lock of hair - talks - Ada - age - got up by a box - creeps - stands in corner - Dr. busy - George about as usual. Luther is now two years and four months old, is very active and mischievous, and tries to repeat anything spoken to him. He still retains his sensitiveness, and whenever he considers his sight are interfered with, he is much grieved and affronted. Ada is today eight mos. old, and still weighs but sixteen pounds. But two teeth show themselves as yet, though I have been expecting others for sometime past. She nows creeps well all over the house changes from the creeping posture to the sitting, and from the sitting posture to the creeping at pleasure, and seems to have very good use of her limbs. She gets many falls, both from the door and the bed, but does not appear to mind them much. Today she was with me in Father Locke's room, and seeing a piece of soap on a box, she raised herself upon her feet and supported herself by one hand, while, with the other she endeavored to reach it. She can stand in the corner very well, and calls after me "mamma mamma." She drinks well from a cup, and when night comes, delights to be placed on the bed to sleep. It has been cloudy today.