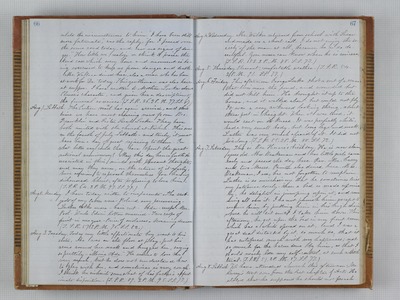 relate the circumstances to him. "I have been still more fortunate," was the reply, "for I passed over the same road today, and saw us signs of danger." How little we realize or think to praise the kind care which every hour and moment is being exercised to keep us from danger and death. Mr. Wallace dined here, also a man who has been at work for Dr. today. This gentleman was also here at supper. I have written to Mother Locke about Elmer's character, and given her a description of the funeral exercises. (T.S.R. 56. 2 P.M. 97. S.S. 87.) Aug. 1. Sabbath. The Eastern mail has again arrived, and this time we have most cheering news from Bro. Franklin and Sister Sarah Locke. They have both united with the church at Nashua. This was on the fourth of July - Sabbath - and truly it must have been a day of great rejoicing to them. In what better way could they have spent the great national anniversary? May this day hence forth be associated in their minds with pleasant thoughts, and may they never, on the return of it yearly, have occasion to reproach themselves for having dishonored Christ, after professing to love him. (T.S.R. 64. 2 P.M. 97. S.S. 79.) Aug. 2. Monday. I have today written to our parents. The subjects of my letter were - Roland very persevering Luther talks more - hair cut - Ada - creeps - Mrs. Pool - Uncle Edwin Cotton married - Two crops of fruit in one year - Price of molasses. Mourning dresses, (T.S.R. 57. 2 P.M. 96. S.S. 82.) Aug. 3. Tuesday. Today my little affectionate boy went to his sister, who was on the floor at play, put his arms round her neck and hugged her, saying so prettily - "Mine Ada." He seems to love her very much, but he does not understand how to play with her, and sometimes is very rough. I think he inherits somewhat of his father's affectionate disposition. (T.S.R. 59. 2 P.M. 95. S.S. 77.) Aug. 4. Wednesday. Mr. Walker returned from school with Susan and made us a short call. I do not enjoy the society of the man at all, because he is so deceitful. You never can know when he is sincere. (T.S.R. 53. 2 P.M. 88. S.S. 73.) Aug. 5. Thursday. Pleasant, comfortable weather. (T.S.R. 54. 2 P.M. 91. S.S. 77.) Aug. 6. Friday. This afternoon George Locke shot a sort of a crane that lives near the pond, and wounded but did not kill him. He brought it up to the house, and it walked about but could not fly. It was a very awkward looking thing, about three feet in height. When it was tired, it would rest on its knees. It was perfectly white, had a very small body, but long legs and neck. Luther was very much afraid of it. It did not live long. (T.S.R. 55. 2 P.M. 88. S.S. 72.) Aug. 7. Saturday. This is Bro. Horace's birthday. He is now eleven years old. Mrs. Brakeman and her little girls came early and passed the day here. Rev. Mr. Curry and two Messrs. Painter also dined here. Mrs. Brakeman, I see, has not forgotten to complain. Luther is so mischievous that he sometimes tries my patience sorely. When a bed is made up nicely, he delights in jumping upon it, and running all over it. I do not punish him, except to confine him by putting him in his high chair where he will sit until I take him down. This afternoon, he got upon the bed in my front room which has a white spread on it, and I was a great deal disturbed by it, so much so, that it has interfered much with my happiness; not so much for the harm done by him, as that I should nearly lose my self-control, at such a little trial. (T.S.R. 51. 2 P.M. 67. S.S. 77.) Aug. 8. Sabbath. We have attended church this afternoon. Mr. Curry's text was from the last chapter of Acts. He stated that he supposed he should not preach