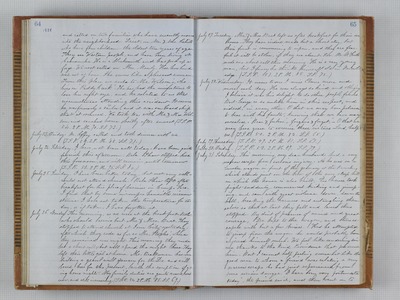 1858. and called on two families who have recently moved into the neighborhood. First, on Mr. & Mrs. Cahill who have four children - the oldest ten years of age. They are Western people, and have been living at Camanche. He is a blacksmith and has put up a forge. We next called on Mrs. Manly. Her husband was not at home. She seems like a pleasant woman. From this place we rode to Mr. Wilson's, who lives on "Paddy Creek." He has had the misfortune to lose his right eye, and he related to us the circumstances attending this accident. It seems he was formerly a sailor, and it was on board ship that it occurred. We took tea with Mr. & Mrs. Wilson, and reached home shortly after sunset. (T.S.R. 54. 2 P.M. 90. S.S. 73.) July 23. Friday. Mr. Coffey called and took dinner with us. (T.S.R. 52. 2 P.M. 88. S.S. 71.) July 24. Saturday. I have not been well today - have been quite feverish this afternoon. Bela Shaw stopped here this forenoon, and will remain until tomorrow. (T.S.R. 50. 2 P.M. 95. S.S. 80.) July 25. Sunday. I have been better today, but not very well - could not attend church. Bela Shaw left after breakfast for his place of business in Campo Seco. I find that by some incomprehensible circumstance I have not taken the temperature for today, or if taken, I have forgotten it. July 26. Monday. This morning, as we were at the breakfast table, who should arrived but Mr. & Mrs. Burt. They stopped to attend church at Ione City yesterday, after which they rode as far as Mr. Staples, where they remained over night. This morning they made but a short call, but will spend the night here. They left their little girl at home. Mr. Brakeman has come building a gravel wall granary for the Dr. and will board here for the present, with the exception of going home night. My family duties are quite numerous now, and still increasing. (T.S.R. 54. 2 P.M. 85. S.S. 69.) July 27. Tuesday. Mr. & Mrs. Burt left us after breakfast for their own home. They have indeed made but a short stay, but their fruit is commencing to ripen, and they are fearful it will be stolen, if they are absent. Rev. Mr. McGrath made us a short call this morning. He is a very young man, but I fancy he thinks himself old in knowledge. (T.S.R. 51. 2 P.M. 85. S.S. 70.) July 28. Wednesday. It seems to me I miss Elmer more and more each day. He was always so kind and obliging. I believe it was his delight to do other people favors. But George is so unlike him in this respect, and indeed, in every other. O that we may have patience to bear with his faults, knowing that we have many ourselves. "Bear & forbear," forgive & forget," - O that we may have grace to exercise these virtues. Lord, help us. (T.S.R. 50. 2 P.M. 82. S.S. 65.) July 29. Thursday. (T.S.R. 49. 2 P.M. 81. S.S. 67.) July 30. Friday. (T.S.R. 52. 2 P.M. 89. S.S. 79.) July 31. Saturday. This morning my dear husband had a very narrow escape from serious injury. As he was on a lumber wagon in front of the granary at the Ranch which stands just on the brow of the very steep hill on which the house is also built, his house took fight suddenly, commenced kicking and jumping, and ran with great violence down, down the hill, breaking the harness and entangling themselves so that at last they fell and were thus stopped. By dint of presence of mind and great courage, Dr. kept to the wagon, and thus escaped with but a few bruise. Had he attempted to jump from the wagon he would probably have injured himself much. We feel like rendering sincere thanks to the kind providence that preserved him. But I cannot help feeling somewhat like the good man to whom a friend was relating a very narrow escape he had just experienced from some serious danger. I have been very fortunate today", the friend said, and then went on to