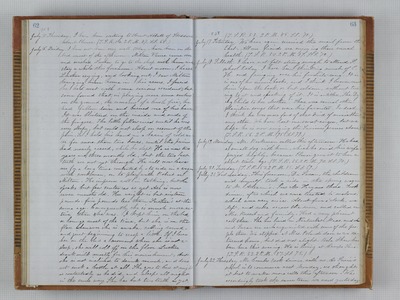 1858. July 15. Thursday. I have been writing to Aunt Abbatt of Stoddard about Elmer. (T.S.R. 54. 2 P.M. 87. S.S. 68.) July 16. Friday. I have not been very well today - have been on the bed most of the afternoon. Milton Vance came over and wished Luther to go to the shop with him and stay a while this forenoon. About noon, I heard Luther crying, and looking out, I saw Milton bringing him home in his arms. I feared he had met with some serious accident, but soon found that, in playing near some embers on the ground, the remains of a brush fire, he had fallen down and burned one of his hands. It was blistered on the inside and ends of the fingers. The little fellow cried until he was very sleepy, but could not sleep on account of the pain, So I held his hand in a basin of cold water for more than two hours, until the pain had nearly ceased, while he slept. He is now two years and three months old, but the two last teeth are not yet through. He will now leave me for a long time contentedly - to ride in a wagon with workmen, or to play with Robert or Milton. He improves well in talking, but he speaks but few sentences as yet. Ada is now seven months old. Her weight is but sixteen pounds - five pounds less than Luther's at the same age. Consequently she is much more active than he was. I kept him on the bed or lounge most of the time, but she is on the floor when ever she is awake, rolling round, and just beginning to creep a little. If I leave her on the bed a moment when she is not asleep, she will roll off on the floor. Luther drank milk mostly for his nourishment, but she is not inclined to drink much, and does not such a bottle at all. She goes to bed at night as contentedly as he did, and sleeps all night in the same way. She has but two teeth as yet. 1858. (T.S.R. 59. 2 P.M. 85. S.S. 70.) 1858. July 17. Saturday. We have again received the mail from the East. All our friends are enjoying their usual health. (T.S.R. 50. 2 P.M. 87. S.S. 72.) July 18. Sabbath. I have not felt strong enough to attend S. school today. I have been thinking much of E. H. and singing over his favorite song. It is in one of his music books, and I think I never saw him open the book, or but seldom, without turning to it and speaking of it. It is entitled," The Dying Child to her Mother." There were several other plaintive songs that were his favorites. Indeed, I think he was more fond of that kind of music then any other. We have lost our sweet singer, but we hope he is now singing the Saviouis praises above. (T.S.R. 56. 2 P.M. 95. S.S. 79.) July 19. Monday. Mr. Brakeman called this afternoon. He had a small dog with him, which he said his wife prized highly, because Elmer gave it to her a short time ago. (T.S.R. 55. 2 P.M. 90. S.S. 70.) July 20. Tuesday. (T.S.R. 53. 2 P.M. 85. S.S. 69.) July 21. Wednesday. This forenoon, Dr. Susan, the children and myself, took a ride in the spring wagon to Mr. Athearn's, Saw Mr. Haynes there. Took dinner, after which we were treated to melons, which were very nice. About five o'clock, we left, and rode across the river and called on Mr. Russel and family. Had a very pleasant call there. She has lived in Nantucket, Mass. and she and Susan are each acquainted with some of the people there. We stopped at Mrs. Poland's door as we returned home, but did not alight. Bela Shaw has been here this evening. He is living at Campo Seco. (T.S.R. 52. 2 P.M. 87. S.S. 75.) July 22. Thursday. Mr. Combes took dinner with us. As Susie's school is to commence next Monday, we thought. it best to make more calls this afternoon. We accordingly took the same team we need yesterday.