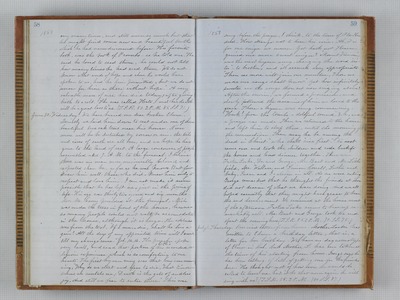 1858. very many times, and still never so much but that he might find some new and beautiful truths which he had never discovered before. His favorite book, was the book of Proverbs - so he told me. He said he loved to read them, he could not tell how many times he had read them. We do not know what words of hope and cheer he would have spoken to us, had he been permitted, but we do not "sorrow for him as those without hope." A very valuable mare of ours has died today, after giving birth to a colt. She was called Kate, and her death will be a great loss to us. (T.S.R. 50. 2 P.M. 85. S.S. 71.) June 30. Wednesday. We have buried our dear brother Elmer. Quietly we laid him down to rest under one of those beautiful live oak trees near his house. Never more will he be disturbed by sorrow or sin - the toils and cares of earth are all over, and we hope he has gone to the land of rest. A large concourse of people assembled at 9. A.M. to the funeral. I believe there was no man more universally beloved and respected than he, as far as he was known. But few knew him well - those who did - knew him only to respect and love him. I can not make it seem possible that he has left us - just in the prime of life. His age was thirty two years and six months. Rev. Mr. Curry presided at the funeral, which was under the trees in front of the house, because so many people could not well be accomodated in the house, although it is large. The address was from the text, "If a man die, shall he live again? All the days of my appointed time will I wait, till my change come." Job. 14. 14. The preacher spoke very well, and read that portion of his E. H.'s recorded religious experience which is so comforting to our hearts. The first hymn sung was that one commencing, "Why do we start and fear to die, what timorous warms we mortals are; Death is the gate of endless joy. And still we fear to enter there." This was 1858. sung before the prayer, I think, to the time of Old Hundred. How strange not to hear his voice, Ah, it is for our singer we mourn. Yet hath not Heaven gained one more sweet singer? "Mount Vernon", was the next hymn sung, changing the word "sister" to brother, and it seemed very appropriate. "Thou no more wilt join our number, Thou no more our songs shalt know." Yet how infinitely sweeter are the songs thou art now singing above! After the service, we formed a procession, and slowly followed the remains of him we loved to the grave. There a hymn was sung, commencing, "Hark! from the tombs a doleful sound," etc. and a prayer was made. Then we returned to the house and left him to sleep there, until the morning of the resurrection. Then may he be among the "dead in Christ" who shall "rise first." We next came over and took the children and rode back to the house and had dinner together. There were Father Locke, Dr. and George, Mr. Burt and Mr. Littlefield, Mr. Wallace and Simon Correll, Luther and baby, Susan and I - eleven in all. As we were eating George remarked that he thought the friends at home did not dream of what we were doing. And we all hoped earnestly that they might have grace to bear the sad bereavement. We remained at the house most of the afternoon. Father Locke seems to bear up remarkably well. Mr. Burt and George took tea and spent the evening here. (T.S.R. 55. 2 P.M. 90. S.S. 75.) July 1. Thursday. Received letters from home. Mother Locke has written to Elmer a birthday letter, that is, a letter for her birthday. We have no daguerreotype of Elmer in Cal. but Mother L. has one taken at the time of his starting from home. George says he has been talking, of late, of getting one for the friends here. He thought not of how soon he would be called to leave us. Can it be that never again he will sing with us? (T.S.R. 55. 2 P.M. 100. S.S. 87.)