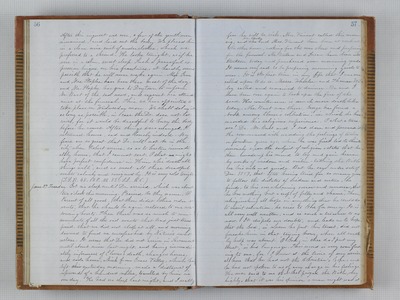 After this inquest was over, a few of the gentlemen remained, and laid out the body. We placed him in a clean nice suit of underclothes, which we preferred to a shroud. He looks tonight, as if he were in a calm, sweet sleep. Such a peaceful expression lingers on his features, it hardly seems possible that he will never wake again. Mrs. Gove and Mrs. Staples have been there most of the day, and Mr. Staples has gone to Drytown to inform Mr. Burt of the sad news, and request his attendance at the funeral. This we have appointed to take place on Wednesday morn. We shall delay it as long as possible, in case the Dr. does not arrive, for it would be dreadful to busy the body before he comes. After things were arranged, I returned home, sad and lonely indeed. My fears are so great that Dr. will not be in the city when Robert arrives, so as to hasten immediately home, that I cannot rest. O that we might have perfect confidence in Him who "doeth all things well", and so meet all these dreadful events calmly and resignedly. It is very cold tonight. (T.S.R. 48. 2 P.M. 83. S.S. 66.) June 29. Tuesday. Got no sleep until Dr. arrived, which was about two o'clock this morning. Praised be thy name, O Parent of all good, that thou didst thus order events, that he should be again restored to our sorrowing hearts. Then there was so much to communicate of all the sad events that had just transpired, that we did not sleep at all, and morning dawned to find us unrefreshed by Natures sweet restorer. It seems that Dr. did not arrive in Sacramento until about nine last night, and being immediately informed of Elmer's death, changed horses, and rode home, which from Grass Valley, which he left yesterday morning, made a distance of upwards of a hundred miles, travelled by him in one day. He had no sleep last night, and I really fear he will be sick. Mrs. Vincent called this morning, and Mrs. Boody and she and Mrs. Vincent have been at work at the other house, cooking for the men there and preparing for the funeral, Mr. Wallace and Susan have been into Stockton today and purchased some mourning goods. It seems very sad to be preparing mourning goods to wear. It is the first time in my life that I was ever called upon to do so. Messrs. Wheeler and Thomas Wiley called and remained to dinner. Dr. and I have been over again to look upon the face of the dead. His countenance is much more death like today. Mr. Burt was there. George has found a book among Elmer's collection, in which he has recorded his religions experience. O what a treasure! Dr. Mr. Burt and I sat down and perused it. He commenced with recording the feelings of twelve or fourteen years ago, when he was first led to think seriously upon the subject of religion - states that he then made up his mind to try and gain heaven by works of wisdom and virtue - taking the Bible as his rule and guide. But he says under date of Dec. 1857, that after having tried for so many years to follow the dictates of wisdom and virtue, he finds, to his over whelming sorrow and remorse, that he has nothing but a "crop of folly and shame." Then, relinquishing all hope in anything that he could do to mint salvation, he cries to God for mercy. It is all very well written, and is such a treasure to us now. It dispels our doubts, and leads us to hope that the God, in whom he put his trust, did not forsake him in that trying hour, when all earthly help was absent. "O God, in thee do I put my trust," is his language. This record is very comforting to me, for I knew at the time of my arrival here that he had not the Christian's hope, and he had not spoken to us of any change in his feelings. He once said to me that he prized the Bible very highly, that it was his opinion a man might read it.