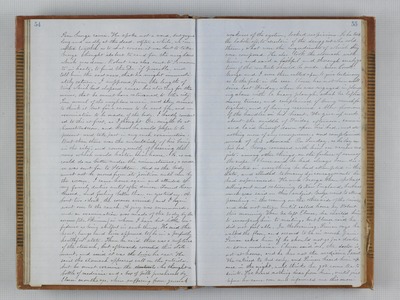 Soon George came. He spoke not a word, but gazed long and sadly at the dead. After a while, we consulted together as to what course it was best to take. George thought it best to send for the neighbors which was done. Robert was also sent to Sacramento in haste, to find the Dr. if possible, and tell him the sad news, that he might immediately return I supposed, from the length of time which had elapsed since his starting for the mines, that he must have returned to the city. Soon several of the neighbors came in, and they seemed to think it best for a coroner to be sent for, and an examination to be made of the body. I hardly consented to this at first, as I thought Dr. might be at hometown now, and knew he would prefer to be present and take part in any such examination. But then there was the uncertainty of his being in the city, and consequently of hearing the news which would hasten him home. So, as we could do no better under the circumstances, a coroner was sent for to Stockton. And as the body must not be moved from its position until seen by the coroner, I came home again and attended to my family duties until after dinner. Found Susan dressed, and feeling better than on yesterday. About two o'clock, the coroner arrived, and I again went over to the ranch. A jury was summoned, and an examination was made of the body by the coroner (Dr. Skimer) in whom I have but little confidence as being skilful in such things. He said the heart, lungs and liver appeared to be in a perfectly healthful state. Then he said there was a rupture of the stomach, but afterwards corrected this statement, and said it was the liver he saw. He said the stomach appeared well on the outride, but he must examine the contents - he thought a bottle of medicine and a box of pills purchased by Elmer months ago, when suffering from general weakness of the system, looked suspicious. So he took the labels off, to ascertain of the druggist who sold them, what were the ingredients of which they were composed. He also took the stomach with him, and said a faithful and through analyzation of the contents should be made. Simon Correll, George and I were then called upon to give testimony as to the facts in the ease. Elmer has not been well since last Friday, when he was engaged in ploughing alone with a heavy plough, which he lifted many times, and complained of being much fatigued, and of having received a blow from one of the handles in his breast. He gave up work about the middle of Friday afternoon, came in and laid himself down upon his bed, and ate nothing more of any consequence, and complained much of his stomach. On Sunday, as he lay an his bed, George conversed with him on various subjects - among other things, on the failure of some of the crops. Elmer said he had always been disappointed in every thing he had attempted in this state, and alluded to many discouragements he had experienced. He and George then spoke of selling out and returning to New England, but not much was said on this subject. George went to attend preaching in the evening on the other side of the river, and did not return until called home by Robert this morning. When he left Elmer, he invited him to accompany him to meeting, but Elmer said he did not feel able. In the evening, Simon says he walked the floor, and seemed to be in much pain. Simon asked him if he should not go for a doctor or some medicine. Elmer said "no, the doctor is not at home, and he has not the medicine I want." He retired to bed early, and Simon heard him up once in the night, and thinks he got some tea to drink. He heard nothing more from him, until just before he came over and informed me this morn,'