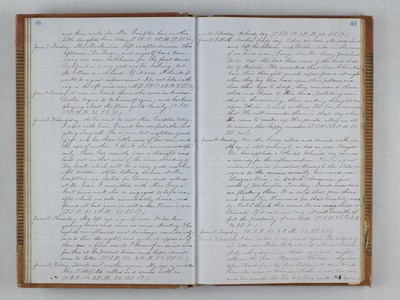 and three weeks old. Mrs. Compton has another little daughter born today. (T.S.R. 60. 2 P.M. 99. S.S. 84.) June 7. Monday. Mr. Mackintire left us after dinner. This afternoon, Dr. Susan and myself have been using our new bath-house for the first time. Our pond is a very good one for bathing, but the bottom is not hard. If it were, I think it would be a great improvement. I do not like walking in the soft mud very well. (T.S.R. 60. 2 P.M. 96. S.S. 78.) June 8. Tuesday. A man was here to dinner who came on business. Luther begins to be himself again, and has been playing about the floor quite busily. (T.S.R. 55. 2 P.M. 91. S.S. 71.) June 9. Wednesday. As Dr. went to visit Mrs. Compton today, I went with him. Found her comfortable, and getting along well. She is now but eighteen years of age, and has three little ones of her own, and the care of another. I think she "commenced life" early. There has recently been a straight road laid out on that side of the river extending to Dry Creek, which will be a very good one when well trodden. After taking dinner at Mr. Compton's, we started for home, and called at Mr. Gove's. I consulted with Mrs. Gove about some work she is engaged to do for me, after which we rode immediately home, and found all had gone on well under Susan's care. (T.S.R. 55. 2 P.M. 87. S.S. 69.) June 10. Thursday. My left eye is quite sore. It has been growing more and more so since Monday. The eyelids are inflamed and discharge considerably, so as to blur the sight, and make it appear as if there was a film over it. I know of no direct cause for this at the present time, and hope it will soon be better. (T.S.R. 52. 2 P.M. 83. S.S. 65.) June 11. Friday. Quite cool weather again. My eye is no better. Mr. Littlefield called and dined with us. (T.S.R. 54. 2 P.M. 82. S.S. 69.) June 12. Saturday. A cloudy day. (T.S.R. 58. 2 P.M. 82. S.S. 69.) June 13. Sabbath. Another cloudy day. Today we have attended church and left the children and Father Locke in the care of our hired man, George. Rev. Mr. Curry preached to us - text - the last three verses of the third chapter of Malachi. He remarked that true Christians have their thoughts much upon Jesus - at night when they lay their heads upon their pillows and close their eyes to sleep, they commend themselves and theirs to His kind, protecting care. And in the morning, their waking thoughts are upon Him. To such as these He has promised that He will remember them in that day when He comes to make up His jewels. May we all be among that happy number. (T.S.R. 60. 2 P.M. 87. S.S. 70.) June 14. Monday. Rev. Mr. Curry called and dined with us. My eye is still seemingly as bad as ever. Tonight Dr. has applied a blister behind my ear, as a remedy for the inflammation. There is a great excitement, quite prevalent through the state, in regard to the mines recently discovered near Frazer's River, in British America, just north of Washington Territory. Great numbers are flocking there. It is said that four thousand leave San Francisco for that locality, weekly, But I think this must be an exaggerated estimate. If it continues long, it will sensibly affect the prosperity of our state. (T.S.R. 56. 2 P.M. 94. S.S. 71.) June 15. Tuesday. (T.S.R. 61. 2 P.M. 77. S.S. 61.) June 16. Wednesday. I have written to my parents again. The subjects of my letter were - Father Locke's recent sickness - Luther pretty well and gaining - Ada - age - teeth - weight - rolls over the floor. Eye sore - Children's daguerreotypes Thanks for letter from Father. A man dined here who came on business. Luther is now two years and two months old. He is getting quite well again,