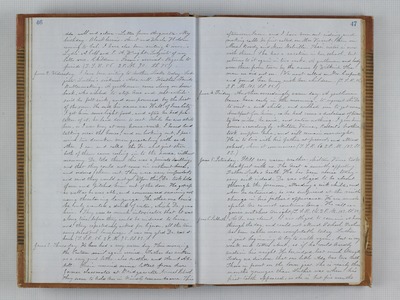 Ada - well and active - Letter from Augusta. My birthday - Blackberries - Aunt and Uncle Holden coming to Cal. I have also been writing to cousin's Lydia A Cobb and E. A. Wright. Subject of my letter were - Children - Susan's arrival - Regards to friends. (T.S.R. 56. 2 P.M. 90. S.S. 75.) June 2. Wednesday. I have been writing to Mother Locke today - Subjects - Luther's sickness - Ada well - Weather - Fruit Butter making. A gentleman came along on horseback, who wished to stop here and rest awhile - said he felt sick, and over powered by the heat of the sun. He said his name was Hull, of Ione City. I got him some light food, and after he had partaken of it, he laid down to rest. While he was still here, as I was busy at my house-work. I heard loud talking near the house, and on looking out, I perceived two drunken men quarreling with each other. I ran and called the Dr. and just then both of them came reeling in to the house, without ceremony. Dr. told them this was a private dwelling, and that they could not come in without leave, and ordered them out. They were very impudent, and said they would not go. Upon this, Dr. took hold of one and pitched him out of the door. He got up as well as he was able, and commenced swearing and using threatening language. The other one said he only wanted a drink of water, which Dr. gave him. They were so much intoxicated that it was a long time before they could be induced to leave, and they repeatededly asked for liquor, all the time using dreadful language. I was very glad Dr. was at home. (T.S.R. 56. 2 P.M. 95. S.S. 83.) June 3. Thursday. We have had a very warm day. This morning the Eastern mail again arrived. Father has written us a very good letter - also mother and Aunt Abbott. Susie received nine letters from her former classmates at Bridgewater Normal School. They seem to hold her in kindly remembrance. This afternoon, Susan and I have been out riding and making calls. We first called on Mrs. Vincent, then on Mrs. Boody and Miss Melville. Their sister is now with them. She has a vacation in her school, but returns to it again in two weeks. A gentleman and lady were there from town by the name of Wilkins. The man we did not see. We next called on Mrs. Carpenter and found her busy with her children. (T.S.R. 56. 2 P.M. 101. S.S. 85.) June 4. Friday. Another exceedingly warm day. A gentleman came here early in the morning, to request the Dr. to visit a sick child, and wished me to get some breakfast for him, as he had come a distance of twenty two miles, he said, and eaten nothing. I gave him some accordingly. Milton Vance, Robert's brother, took supper here, and will remain over night. He is to live with his father at present, and attend school, when it commences. (T.S.R. 60. 2 P.M. 103. S.S. 83.) June 5. Saturday. Still very warm weather. Milton Vance took breakfast with us. The heat is sensibly affecting Father Locke's heath. He has been worse today - very sick indeed. Dr. was obliged to be absent through the forenoon, attending a sick child, and when he returned, he was surprised at the visible change in his father's appearance. We are much afraid he cannot continue long. He will require watchers tonight. (T.S.R. 56. 2 P.M. 103. S.S. 82.) June 6. Sabbath. As Dr. was absent, I was obliged to remain at home through the day, and could not attend S. school. Father has been rather more comfortable today. Luther is just beginning to try to walk again, but is very weak and totters about, as if he could hardly sustain his weight. He has, indeed, lost much strength. Today we discover that our little Ada has two teeth. Those in front on the lower jaw. She is nearly three months younger than Luther was when his first tooth appeared, as she is but five months