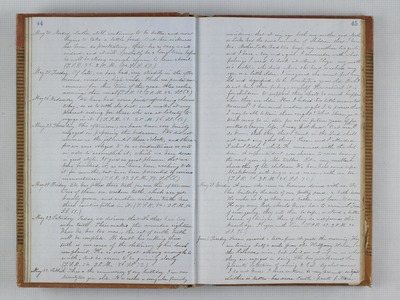 May 24. Monday. Luther still continues to be better, and now begins to take a little food. But his sickness has been so prostrating, that he is very weak indeed, and it will probably be a long time before he will be strong enough again to run about. (T.S.R. 55. 2 P.M.84. S.S. 67.) May 25. Tuesday. Of late, we have had, very steadily in the afternoons, exceeding high winds. These are quite uncommon for this time of the year. Also cooler mornings than usual. (T.S.R. 52. 2 P.M.82. S.S. 63.) May 26. Wednesday. We have had some quite refreshing showers today, so as to settle she dust, and make it very pleasant riding for those who are at liberty to engage in it. (T.S.R. 51. 2 P.M.76. S.S. 61.) May 27. Thursday. This afternoon, we have been very busily engaged in papering the bedroom. We did not commence the job until three o'clock, and therefore we were obliged to be as industrious as ants in order to accomplish it, which we have done in good style. It gives us great pleasure that we have finished it, as we have been wishing to do it for months, but have been prevented by various circumstances. (T.S.R. 47. 2 P.M.79. S.S. 66.) May 28. Friday. Dr. has filled three teeth for me this afternoon. Two of them are wisdom teeth, which are yet hardly grown, and another wisdom teeth has three cavities filled in it. (T.S.R. 54. 2 P.M.84. S.S. 68.) May 29. Saturday. Today we discover that Luther has two more teeth. This make the number eighteen. When he has two more, the set of milk teeth will be complete. No doubt his cutting these teeth is one cause of the obstinacy of his bowel complaint. He is not yet strong enough to walk, but he seems to be gaining slowly. (T.S.R. 54. 2 P.M.86. S.S. 73.) May 30. Sabbath. This is the anniversary of any birthday. I am now twenty two years old. It is rather a singular family concidence, that at my age both my mother and Mother Locke had the same number of children that I have two. Mother Locke had two boys, my mother two girls, and I have a boy and a girl. I remember with what feelings I used to look at Aunt Eliza - my mother's sister - who died when she had reached my age, or a little older. I imagined she must feel very old and degnified, to be twenty two years old. But I do not have those feelings myself. How natural it is for children to suppose they shall be much happier when they are older. Have I indeed two little immortal treasures? O how much wisdom ought I to possess that I may be able to train them aright! What blessings or trials may be in store for me in future years, if permitted to enjoy life, I may not know. But one thing do know, that "they that trust in the Lord shall not want any good thing." Susan and I attended S. school today, while Dr. remained with the children. A superintendent was chosen to serve during the next year, viz. Mr. Walker. Not a very excellent choice this, of the children. We have had some ripe blackberries with sugar and cream, with our tea. (T.S.R. 56. 2 P.M.86. S.S. 75.) May 31. Monday. A man who came on business, dined with us. Dr. has built, by the side of our pretty pond, a bath-house. He wishes us to go there and bathe, and learn to swim. He says every lady should know how to swim. In a case of emergency, they will then be safe, or stand a better chance of being so, than if they do not possess this knowledge. I agree with him. (T.S.R. 49. 2 P.M.90. S.S. 76.) June 1. Tuesday. Susan received a letter from Augusta this morning. They are living half a mile from the Halfway House, on the Calaveras river, but she does not inform us what they are engaged in doing. She had just learned her parents' intention of coming to Cal. By what means I do not know. I have written to my parents - subjects Luther is better - has more teeth - pants pattern -