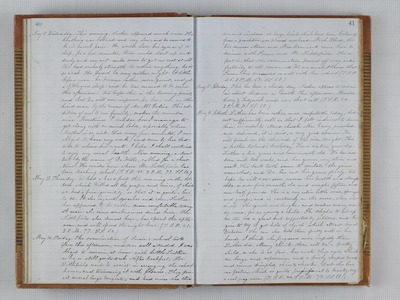 May 12. Wednesday. This morning, Luther appeared much worse. His breathing was labored and very slow, and he seemed to be in much pain. He would close his eyes as if to sleep, for a few minutes, then would start up suddenly and cry out could seem to get no rest at all. He had scarcely strength to notice anything, he is so weak. He passed a very restless night. A little before noon, he became rather more quiet, and got a little good sleep : and he has seemed to be easier this afternoon. We hope this is the turning point, and that he will now improve. We have now another hired man by the name of Mr. McIntire. This addition of one to our family, makes the number nine. Sometimes I wonder how I manage to get along with so much labor, especially when Luther is so sick. For every few minutes, I am obliged to leave my work, and run to his bedside to relieve his wants. I hope I shall continue to enjoy my usual health. Near evening, a dentist by the name of Dr. Wells, called for a short time. He resides near where Mr. Littlefield has been teaching school. (T.S.R. 48. 2 P.M. 79. S.S. 60.) May 13. Thursday. We had a hard frost this morning on the bottom which killed all the grapes and vines, of which we had a fine quantity, so that it is quite a loss to us. It also injured squashes and corn. Luther has appeared to be rather more comfortable today. A man who came on business dined here. Mr. Littlefield also dined here, has spent the afternoon, and will spend the night here. (T.S.R. 41. 2 P.M. 77. S.S. 60.) May 14. Friday. The examination of Susie's school took place this afternoon, and was well attended. I was obliged to remain at home with little Luther, as he is still quite sick. After breakfast, Mr. Littlefield went to assist in arranging the schoolhouse, and trimming it with flowers. They fired several large bouquets, and had vines over the door and windows. A large limb which had been broken off from a peach tree was placed overhead. Noah Flood, the two misses Morse and Miss Brannock came here to dinner with Susan and Mr. Littlefield. The report is, that the examination passed off very satisfactorily to all concerned. We are much pleased that Susan has succeeded so well with her school. (T.S.R. 46. 2 P.M. 68. S.S. 58.) May 15. Saturday. This has been a cloudy day. Luther appears to remain in about the same in health. This afternoon, Messrs. Curry & Sedgwick made us a short call. (T.S.R. 54. 2 P.M. 70. S.S. 58.) May 16. Sabbath. Luther has been rather more comfortable today, but not sufficiently well so that I felt inclined to leave him in order to attend church. Mr. Curry preached and delivered, it is said, a very good sermon. He will preach on the other side of the river tonight. This is brother Roland's birthday. He is sixteen years old. Luther is two years and one month old. He has now been sick two weeks, and has grown very thin and weak. His back teeth seem to irritate the gums somewhat, and Dr. has cut his gums freely. We hope he will now soon recover his health and strength. Ada is now five months old and weighs fifteen and one-half pounds. She is a very active little miss, springs and jumps, and is constantly on the more, when she is up. She squeals and laughs, and makes many merry noises, for so young a child, She delights to sit up on the bed a great deal supported by pillows, and begins to try to get hold of objects which attract her attention. She can also hold them pretty well in her hands. I think she progresses more rapidly than Luther did. Many think Ada will be a pretty child, as she is so fair, has such blue eyes, which are large and expressive, and a finely shaped head, and round dimpled chin & checks. But she has one feature which is quite prejudicial to beauty, viz. a real prog nose. (T.S.R. 44. 2 P.M. 77. S.S. 68.)