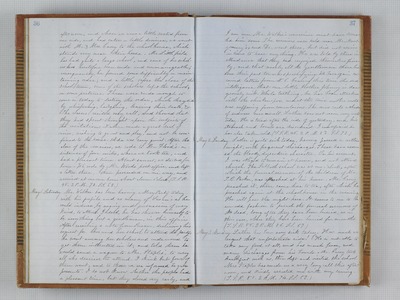 afternoon, and when we were a little rested from our ride, and had eaten a little dinner, we went with Mr. & Mrs. Curry to the schoolhouse, which stands very near their house. Mr. Littlefield has had quite a large school, and some of his scholars have heretofore been rude and unmanageable, consequently, he found some difficulty in maintaining order, and a little before the close of the school term, some of the scholars left the school, on some pretence. These were rude enough to come in today to destroy the order, which they did by whispering, laughing, leaving their seats, etc. The classes recited very well, and showed that they had spent thought upon the subjects of the recitations Luther made a great deal of noise, wishing to go out and play, and not be confined to the house. Ada was very quiet. After the close of the exercises, we code to Mr. Flood's - a distance of four miles, where we took tea, and had a pleasant time. About sunset, we started for home. We rode by Mr. Woods' post office, and left a letter there, then proceeded on our way, and arrived at our own home about eleven o'clock. (T.S.R. 45. 2 P.M. 72. S.S. 62.) May 1. Saturday. Mr. Walker has been having a May Party today with his pupils and as many of Susan's as he could induce, by urging and persuasion of every kind, to attend. Indeed, he has shown himself to be any thing but a gentleman, in this affair. After receiving a note from Susan, declining his request for her and her school to attend the party, he went among her scholars and endeavored to get them interested in it, and told them he would send a wagon to Mr. Staples', to carry all who desired to attend. I think but four of them went, and to those we are informed he gave presents. I do not know whether the people had a pleasant time, but they closed very early, and I am sure Mr. Walker's conscience must have troubled him some. The exercises were held near Mr. Montgomery's, and Dr. went there, but did not arrive in time to hear any thing. He was told by those in attendance that they had enjoyed themselves finely, and that nearly all the gentlemen there had done their part towards speechifying. We have again received letters from N. E. bearing this time the sad intelligence that our little brother Johnny is dangerously sick. While teething, he has been attacked with the chicken pox, and at the time mother wrote was suffering from convulsions. The news casts a shade of sadness over us all. Luther does not seem very well today. He is tired after the side of yesterday, and his stomach and bowels are disordered. I am afraid he has also taken cold. (T.S.R. 46. 2 P.M. 83. S.S. 73.) May 2. Sunday. Luther is quite sick today, having passed a restless night, with frequent discharges. These have assumed the bloody, dysenteric character. On his account, I was obliged to remain at home, and not attend church. The Sabbath school was at one o'clock, after which the funeral sermon of the children of Mr. T. B. Parker, was preached at his house. Mr. Curry preached it, there came here to tea, after which he preached again at the schoolhouse in the evening. He will pass the night - here. It seems to me to be an add fashion to preach the funeral sermons of the dead, long after they have been buried, as in this case, where they have been buried for months. (T.S.R. 55. 2 P.M. 86. S.S. 69.) May 3. Monday. Luther has been very sick today. How much we regret that unfortunate ride! He is not able to take any food at all, and has much fever, and many discharges from his bowels. Mr. Burry look breakfast with us, then left and visited the school. Mrs. Staples has made us a very long call this afternoon, and kindly assisted me with my sewing. (T.S.R. 51. 2 P.M. 74. S.S. 63.)