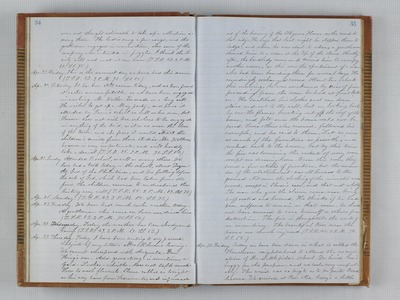 was not thought advisable to take up a collection among them. The ladies sang a few songs, and the gentleman engaged in conversation, also some of the company were interested in puzzles. I think the Society will next meet at our house. (T.S.R. 51. 2 P.M. 80. S.S. 75.) Apr. 23. Friday. This is the warmest day we have had this season. (T.S.R. 53. 2 P.M. 90. S.S. 81.) Apr. 24. Saturday. It has been still warmer today, and we have found it rather uncomfortable, as we have been engaged in washing. Mr. Walker has made us a long call. He wished to get up a May party, and have it attended by Susie's school as well as his own, but Susan does not wish her scholars to be engaged in anything of the kind, as it is so near the close of the term, and she fears it would attract the children's minds from their studies. Mr. Walker, however is very importunate, and will hardly take a denial. (T.S.R. 56. 2 P.M. 93. S.S. 83.) Apr. 25. Sunday. Attended S. school, as well as many others. We have had a talk today in the school, about Dagon – the God of the Philistines, and his falling before the ask of God, which had been taken from the Jews. The children seemed to understand the history very well. (T.S.R. 55. 2 P.M. 89. S.S. 73.) Apr. 26. Monday. (T.S.R. 49. 2 P.M. 85. S.S. 71.) Apr. 27. Tuesday. We have had much cooler weather today. A gentleman who came on business, dined here. (T.S.R. 53. 2 P.M. 75. S.S. 60.) Apr. 28. Wednesday. Today the weather has been cloudy and rainy. (T.S.R. 49. 2 P.M. 61. S.S. 53.) Apr. 29. Thursday. Today I have been writing to my parents. Subjects of my letter. Mrs. Holman's leaving. We cannot correspond with Augusta - Gen. King's son - Ada - grows strong - is sometimes afraid - Luther - whistles - does not talk much - How to wash flannels. Elmer called in tonight on his way home from Sacramento, and informed us of the burning of the Elkgrove House on the road to that city. He says that last night he stopped there to lodge, and when he was about to retire, a gentleman showed him to a room at the top of the stairs. Shortly after, the landlady came and desired him to occupy another room, as this was the apartment of a man who had been boarding there for several days. He accordingly exchanged rooms. About two o'clock this morning, he was awakened by cries of fire proceeding from the room he had at first taken. He snatched his clothes and ran down stairs and out to the well, but on looking back he saw the flames bursting out of the roof of the house, and felt sure the house could not be saved. Some others also aroused, followed his example, and he said to them, "Let us save as much of the furniture as possible," and rushed back to the house, but by this time the fire was devouring the contents of every room except one dressing-room. From this room they saved a few articles of furniture, but the remainder of the establishment was all burned to the ground. Not even the clothing of the inmates were saved, except in Elmer's case, and that not wholly. The man who gave the alarm came near being suffocated and burned. He thinks if he had been suffered to remain in that room, he should not have aroused to save himself or others from destruction. The fire is thought to be the work of an incendiary. The beautiful trees near the house are much injured. (T.S.R. 40. 2 P.M. 72. S.S. 62.) Apr. 30. Friday. Today we have been down in what is called the Henderson neighborhood to attend the examination of Mr. Littlefield's school. Dr. hired Geo.'s buggy for the purpose, and we rode very comfortably. The wind was so high as to be quite troublesome. We arrived at Rev. Mr. Curry's a little