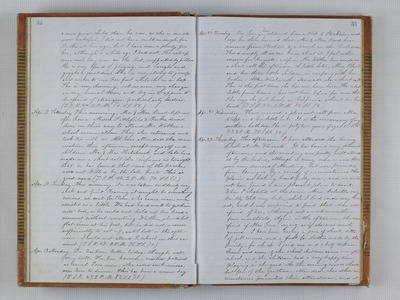 a more just child than he was, as she is much more wakeful. I did not have milk enough for Luther at her age, but I have now a plenty for her, although a while ago I had not. She sits up some each day now on the bed, supported by pillows. She is very fond of playing, and laughs and giggles a great deal. She is very strong to jump and wishes to use her feet while she is in lap. She is very observing, notices even any change in my usual dress, and begins to appear to be afraid of strangers, particularly ladies, (T.S.R. 44. 2 P.M. 64. S.S. 58.) Apr. 18. Saturday. This morning, Mr. & Mrs. Burt left us for home. Messrs. Littlefield & Fiske dined here on their way to attend Mr. Walker's school examination. They also returned and took tea with us. All have attended the examination this afternoon except myself and children. Mr. & Mrs. Hitchcock and babe have made me a short call. Dr. informs us tonight that he has found that some of the peaches were not killed by the late frosts. This is good news. (T.S.R. 44. 2 P.M. 70. S.S. 61.) Apr. 18. Sunday. This morning, Dr. was taken suddenly very sick and faint. Fearing it might be something serious, we sent for Elmer who came over, and assisted us a little. We had hard work to get him into bed, as he could not hold up his head a moment without vomiting. We thin placed hot flat-irons at his feet, but he did not recover sufficiently to sit up, until late in the afternoon. I could not attend S. school on this account. (T.S.R. 48. 2 P.M. 76. S.S. 70.) Apr. 19. Monday. Dr. has been better today, though not very well. He, has, however, visited patients as usual. Two men, who came on business, were here to dinner. This has been a warm day. (T.S.R. 49. 2 P.M. 83. S.S. 75.) Apr. 20. Tuesday. Bro. George has returned from a trip to Stockton, and says he there learned that Mr. & Mrs. Read have removed from Stockton to a ranch on the Calaveras. This is simply all we can know about it, I feel rather anxious for Augusta's welfare. Mr. Walker has made us a short call this afternoon. A little later, Mrs. Poland and her three little children, in company with her brother - Allen Went worth - also made me a short call. This is the first time she has ever been here. She is but little from home - has not been before for months. She says she feels lonely in California without her husband. (T.S.R. 52. 2 P.M. 83. S.S. 72.) Apr. 21. Wednesday. Have received a pleasant call from Mrs. Clapp and her little babe. It is the anniversary of my mother's birthday. She is forty two years of age. (T.S.R. 49. 2 P.M. 78. S.S. 72.) Apr. 22. Thursday. This afternoon, I have attended the Sewing Circle at Mr. Vincent's. It has been a very pleasant afternoon, and the meeting was pretty well attended by the ladies, although as many more as were there were very desirous of attending, but were prevented from doing so by a variety of circumstances. The plains are looking beautifully now, and we could not have found a more pleasant place to meet. When I alighted at the home, Miss Melville very kindly took my babe, while I laid aside my bonnet, and I was surprised to find that Ada was afraid of her, although not a week more than four months old. Again in the afternoon, she was afraid of Mrs. Gove, crying as if she were much grieved. I have been having a pair of sheets, ditto of pillow cases, and a frock for Luther made by the Society, for which I paid one and a half dollars. Susan and some of the school children came over after school, and the children had a very happy time playing in the yard. As the evening was so short, but few of the gentlemen attended, also other circumstances prevented their attendance, and it