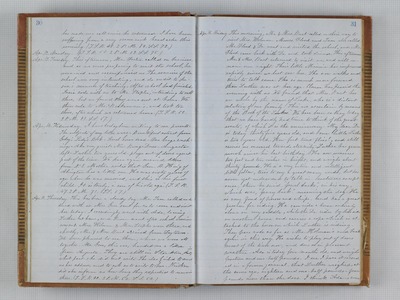 has made us a call since he returned. I have been suffering from a very severe sick headache this evening. (T.S.R. 48. 2 P.M. 82. S.S. 72.) Apr. 12. Monday. (T.S.R. 50. 2 P.M. 82. S.S. 75.) Apr. 13. Tuesday. This afternoon, Mr. Foster called on business, and as we were preparing to visit the school, he remained and accompanied us. The exercises of the school were very interesting, and do credit to Susan's manner of teaching. After school had finished, Susie rode with us to Mr. Staples, intending to call there, but we found they were not at home. We then rode to Mr. Brakeman's, and took tea there, after which we returned home. (T.S.R. 50. 2 P.M. 87. S.S. 67.) Apr. 14. Wednesday. I have today been writing to our parents. The subjects of my letter were - Beautiful extract from Godey's Lady's Book - Sorrel horse dead - Our large washing. Ada very quiet - New Berage Dress - Augusta left Luther two years old - plays out of doors a great part of the time. We have again received letters from N. E. Mother writes that Gen. B. King of Abington has a little son. He was sixty years of age when he was married, and this is his first child. It is truly, a "son of his old age." (T.S.R. 47. 2 P.M. 71. S.S. 57.) Apr. 15. Thursday. This has been a cloudy day. Mr. Jam called and dined with us. Mrs. Gove sent for us to come and visit her today. I accordingly went with Ada, leaving Luther at house, and Susan went after school session was out. Mrs. Holman & Mrs. Staples were there, and shortly, Mr. & Mrs. Burt arrived from Drytown. We were pleased to see them, when we were all together. Mr. Gove, this eve, handed me a letter from Augusta. They are still in Stockton, but in what part she did not write. She also failed to send us her address, and to ask us to write to her. Neither did she inform us how long they expected to remain there. (T.S.R. 40. 2 P.M. 60. S.S. 50.) Apr. 16. Friday. This morning, Mr. & Mrs. Burt called on their way to visit Mrs. Holman. Messrs. Flood and Tam also called. Mr. Flood & Dr. went and visited the school, and Mr. Flood came back with Dr. and took dinner. This afternoon Mr. & Mrs. Burt returned to visit us, and will remain over night. Their little Minnie has improved rapidly since we last saw her. She now walks and tries to talk some. She is much more forward than Luther was at her age. Elmer has passed the evening with us. We found that Mrs. Burt has an uncle by the name of Locke, who is a distant relative of our family. This we ascertain by means of the "Book of the Lockes." We have been so busy today that we have hardly had time to think of the great events, of which it is the anniversary. My dear Dr. is today thirty five years old, and our little Luther is two years old. How fast time flies !, and still carries us onward towards eternity. Luther has grown much since his last birthday. He now measures two feet and ten inches in height, and weighs about thirty pounds. He is a very active and intelligent little fellow, tries to say a great many words, but has never yet endeavored to talk in sentences except once, then he said, "Jewel barks", in his way, which was, "Jewey bark," meaning the dog. He is very fond of horses and whips, and has a great passion for riding. He can ride a horse entirely alone on my saddle, while the Dr. rides by his side on another horse and carries a rope which is attached to the horse on which Luther is riding. They have rode as far as Mr. Holman's and back again in this way. He wishes to play out of doors most of the time now, and does so in pleasant weather. Ada is today four months old, and weighs fourteen and one-half pounds. I see I have it recorded in former journal, that Luther weighed, at the same age, eighteen and one-half pounds - four pounds more than she does. I think Ada is even