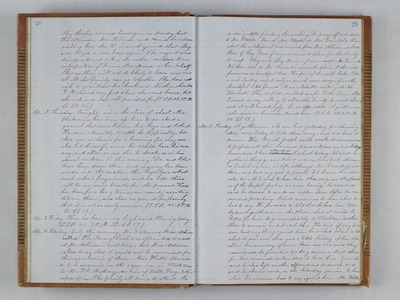 They therefore returned home again on Monday last. This afternoon, Mrs. Holman and Aunie have been visiting here. Mrs. H. is much rejoiced that they were obliged to come home again. She says it is no disappointment to her, she rather considers it an interposition of Divine Providence in her behalf. She says they will not be likely to leave now, until all the family can go together. She does not wish to go without her husband. Neither should I. It rained very fast when she went home, but she rode and was well provided for. (T.S.R. 48. 2 P.M. 61. S.S. 56.) Apr. 8. Thursday. Tonight, since the close of school, Mr. Brakeman has been up here to see about a quarrel that arose between his boys and Robert. He came ostensibly to settle the difficulty, but there was no chance for a hearing for anyone else but himself, since he would have his own way, and allow no one else to speak, as is his usual custom. So this evening, Dr. and Robert have been down there, and inquiry has been made into the matter, the boys have asked each other's forgiveness, and we hope there will be no more trouble for the present. There has been, for a long time, an enmity existing between them, and there are grounds for fearing that it is not so easily overcome. (T.S.R. 45. 2 P.M. 60. S.S. 53.) Apr. 9. Friday. There has been a very high wind blowing today. (T.S.R. 41. 2 P.M. 63. S.S. 57.) Apr. 10. Saturday. Early this morning. Mr. Walker and Miss Athearn called. The Sewing Circle was appointed to meet at Mr. Athearn's next time, but Miss Athearn called to say that it would not be convenient for them, as a cousin of theirs - Miss Hattie Lanins is to be married on the same eve, in Stockton, to Mr. T. R. Anthony, cashier of Wells, Fargo & Co.'s express office. The family all desire to attend the wedding. After finishing the washing, Dr. & myself rode down to Mr. Staples'. Found Mr. Staples at Mrs. Gove's, told them about the intelligence I had received from Miss Athearn, asked them if they knew of any convenient place for the Society to meet. They said they knew of none except Mr. Vincent's. We then rode to Mr. Vincent's, across the plain. O the wild flowers are so beautiful there. The face of the earth looks like a rich Turkey carpet, only so much more magnificently beautiful. We found Miss Melville visiting at Mr. Vincent's. She, at first, mistook me for Sister Susan. Mrs. Vincent is very willing to allow the Society to meet there, and it will, accordingly, be so appointed. A gentleman, who came on business, dined here. (T.S.R. 42. 2 P.M. 74. S.S. 68.) Apr. 11. Sunday. A gentleman, who was here yesterday purchasing steers, came today to take them away, and was here to dinner. How I wish people could make it convenient to perform all their business transactions on weekdays. Susan and I have attended S. school today. We went together in the gig, and Robert rode on horseback. As soon as S. school was over, we left, although Mr. Carnduff was there, and had engaged to preach. We know his character too well to wish to hear him thus disgrace the preacher of the Gospel. Just as we were leaving, he rose and said he desired to make an explanation before he commenced preaching. Robert remained to hear what he had to say. He proceeded to tell that he had been told by some gentleman in the place, that it would be better for him to go immediately to Stockton, rather than to remain and preach here. He said if any person had any thing against him, he wished them to tell what it was, and then gave a little history of his life, all in his own way, of course. Some rose and said they considered he preached too ding sermons. But those few that remained, submitted to hear him preach, and he also left another appointment to preach, and said he should come, on the Saturday previous, to hear what his enemies had to say against him. Mr. Walker.