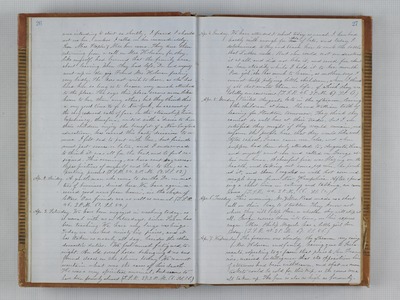 were intending to start so shortly, I feared I should not see her, unless I called on her immediately. Soon Mrs. Staples & Mrs. Gove came. They were then returning from a call on Mrs. Holman, for they, like myself, had learned that the family were about leaving. When they had left, Dr. and myself went up in the gig. Found Mrs. Holman feeling very badly. She does not wish to leave, as she has lived here so long as to become very much attached to the place. She says this place seems more like home to her than any other, but they think this a very good time to go to New York, on account of the very reduced rates of fare on the steamship line. Expediency, therefore, united with a desire to have their children enjoy the benefit of a New England education, has caused this hasty decision to remove. I felt sad to part with her, but friends must part sooner or later, and I endeavored to think it was all for the best, and to feel resigned. This evening, we have sent daguerreotypes pictures of myself and Dr. to her, as a parting present. (T.S.R. 54. 2 P.M. 63. S.S. 53.) Apr. 2. Friday. A gentleman who came to see the Dr. on matters of business, dined here. We have again received "good news from home," in the shape of letters. Our friends are as well as usual. (T.S.R. 46. 2 P.M. 61. S.S. 54.) Apr. 3. Saturday. We have been engaged in washing today, as is usual with us on Saturdays, since Susan has been teaching. We have very large washings. Today we was hed ninety six prices, and it has taken us nearly all day, besides the other domestic duties. We feel much fatigued tonight. An old sorrel horse belonging to us was found dead on the plains today. We cannot ascertain what was the cause of his death. He was a very spirited arrival, but seems to have been formerly abused. (T.S.R. 37. 2 P.M. 66. S.S. 56.) Apr. 4. Sunday. We have attended S. school today as usual. I have had hardly milk enough for Ada of late, and today I determined to try and teach her to suck the bottle that Luther used. But she could not understand it at all, and did not like it, and cried for about an hour steadily while I hold it to her mouth. "Poor girl," she has much to learn, as mother says. I cannot help pitying little children, when I think of all that awaits them in life, of which they are totally unconscious. (T.S.R. 46. 2 P.M. 69. S.S. 61.) Apr. 5. Monday. Visited Augusta late in the afternoon, leaving the children at home. She and William talk of leaving for Stockton tomorrow. They think they cannot do well here at their trades, but I am satisfied they might if they would remain, and inform the people here that they would like work. After school, Susan came over also, and when supper had been duly attended to, Augusta, Susan, and myself went over and called on George at his own house. A cheerful fire was blazing on the hearth, and taking out some pop-corn, he parched it, and then regaled us with hot command maple sugar from New Hampshire. After spending a short time in eating and talking, we came home. (T.S.R. 44. 2 P.M. 66. S.S. 60.) Apr. 6. Tuesday. This morning, Mr. & Mrs. Read made us a short call on their way to Stockton. They know not where they will stop there, or whether they will stop at all. George carries them into town, on his express wagon. Mrs. Philip Megerle has a little girl born today. (T.S.R. 48. 2 P.M. 67. S.S. 56.) Apr. 7. Wednesday. The forenoon was cloudy, the afternoon very rainy. Mrs. Holman and family, having gone to Sacramento, expecting to go from that place to San Francisco, received intelligence that the opposition live of steamers had been withdrawn, and that no more tickets could be sold for this trip, as the rooms were all taken up. The fare is also as high as formerly.