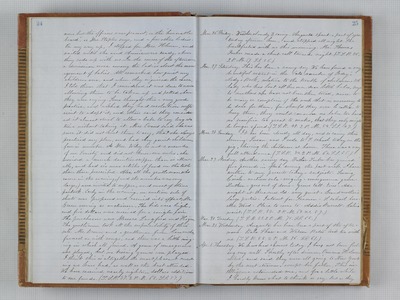 none but the officers were present, or the "honorable board," as Mrs. Staples says, and a few other ladies. On my way up, I stopped for Mrs. Holman, and waited until she and Annie were ready, when they rode up with us. In the course of the afternoon, a discussion arose among the ladies about the management of babies. All remarked how quiet my children were, and when they inquired the cause, I told them that I considered it was due to never allowing them to be taken up and petted when they were crying. Some thought this a very good practice, and wished they had resolution sufficient to adopt it, and others said they considered it almost cruel to allow a babe to cry long at a time without taking it. Mrs. Evans said she was sure it did not hurt them to cry, that she always practised my plan, and had very quiet children, four in number. As Mrs. Wiley is not a member of our Society and did not know our rules, she provided a much daintier supper than is allowable, and had six more articles of food on the table than those prescribed. Also, all the gentlemen who came in the evening, (and the number was very large,) were invited to supper, and most of them partook. Early in the evening, an auction sale of shirts was proposed and carried into effect, Mr. Green serving as auctioneer. The bids were high, and five dollars were received for a single pair. The purchasers were Messrs. Langford and Hagan, The gentlemen took all the responsibility of this sale. Mr. Brown and a gentleman from Camanche, favored us with songs, and there was a little singing in which all joined. A game of consequence was played, but no kissing games were played. I think this is altogether the most pleasant meeting we have had, as well as the best attended. We have received nearly eighteen dollars addition to our funds. (T.S.R. 37. 2 P.M. 65. S.S. 57.) Mar. 26. Friday. Weather cloudy & rainy. Augusta spent a part of yesterday afternoon here, and stopped all night. She breakfasted with us this morning. Mr. Thomas Parker made a short call towards night. (T.S.R. 36. 2 P.M. 67. S.S. 56.) Mar. 27. Saturday. This has been a rainy day. We have found a very beautiful extract in the late number of Godey's Lady's Book, relative to the trouble of children. A lady who has lost all her own dear little babes, says to mothers who have not been thus tried, never to be weary or complain of the work that is necessary to be done for them, for should they ever be called to busy them, they would consider no labor too hard no sacrifice too great to make, that they only might be longer spared. (T.S.R. 48. 2 P.M. 54. S.S. 49.) Mar. 28. Sunday. It has been cloudy all day, and is rainy this evening. Susan and I rode to S. school today in the gig, leaving the children at home. There was a very full attendance. (T.S.R. 34. 2 P.M. 60. S.S. 55.) Mar. 29. Monday. Another rainy day. Father Locke has gained five pounds in flesh during the past week. I have written to my parents today - subjects - Sewing Circle - auction sale - singing - consequence game. Luther - goes out of doors - grows tall - tires - Ada weight at three mos. old – very quiet - Grandmother's large parties - Interest for Seamen - S. school here. Mr. Wood - place to come to - Addie Burrell - Caler's waist. (T.S.R. 50. 2 P.M. 63. S.S. 59.) Mar. 30. Tuesday. (T.S.R. 55. 2 P.M. 75. S.S. 65.) Mar. 31. Wednesday. Augusta has been here a part of the afternoon. Bela Shaw and Watson Bates took tea with us. (T.S.R. 55. 2 P.M. 76. S.S. 61.) Apr. 1. Thursday. We have had showers today. I have not been feeling very well. Shortly after dinner, Emma Holman called, and said they were all going to New York by the next steamer, except her father. This intelligence astounded me, and for a little while I hardly knew what to think or say. But as they