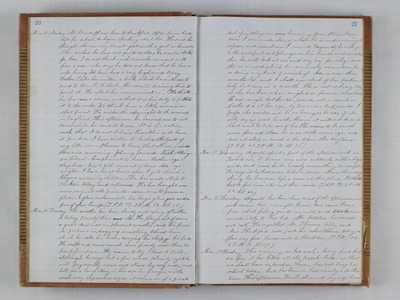 Mar. 15. Monday. Mr. Carnduff was here to breakfast. After Susan had left for school, he began speaking about her. He said he thought she was very smart - just such a girl as he would like - wished he were not quite so old, he would "strike" for her. I do not think such remarks sounded well from a man who says he does not know but he has a wife living. We have had a very high wind today. Father Locke has written a book which he intends to send to Bro. L. F. Locke this mail, desiring him to print it. He call it his "communication." He thinks he has seen a vision, and that it is his duty to publish it to the world. We think him a little insane on that point. He wishes the copy right to be secured in England. This afternoon he desired me to sit down while he read it to me. It is of a nature such that I do not believe Franklin will have it printed. I have written to Mother - Subjects of my letter were - Pleasure to learn that all our friends there were recovering - Johnny forward - North Abington liberal - Compliment to Susan - Luther - age - plays horse - tries to talk - runs out of doors - Ada - age - weight - I leave her at home when I go to church - Rhyme concerning children. Dr. has made a trip to Stockton today and returned. He has brought me some very valuable presents - some small preserve plates - a glass molasses pat - two large glass jars and a pair of glass lamps. (T.S.R. 37. 2 P.M. 62. S.S. 56.) Mar. 16. Tuesday. The weather has been cloudy and rainy. Luther is today twenty three mos. old. He plays out of doors a great deal now in pleasant weather, and his favorite pastime is, dragging something behind him which he calls his horse, carrying his whip in his hand. He walks and runs much more firmly now than he has before done. He seems to try hard to talk, although he says but a few words plainly, yet he will frequently come and stand by my side, and tell me a long story in his own language, with such very expressive eyes, it seems as if a great deal of intelligence were beaming from them. Sometimes I can understand what he is endeavoring to express, and sometimes I cannot. Frequently he will go to the waterpail and plunge in his hands and wrists, then he will look at me and say "wy" for "why," and this is a word which he commonly uses when he is doing any kind of mischief. Ada is now three months old, and I shall now speak of her particularly but once in a month. She is not as heavy today as she has been when weighed on former occasions. She now weighs but fourteen pounds, not so much as Luther did at her age, by two and a half pounds. I prefer she would not be as heavy as he was, if she only enjoys good health, because it will not be such hard work to take care of her. She seems to be much more forward than he was at the same age, and does not sleep as much as he did in the daytime. (T.S.R. 40. 2 P.M. 62. S.S. 56.) Mar. 17. Wednesday. Augusta spent a part of the afternoon with us. Towards eve, it became very cold suddenly with a high wind, and some hail - nearly resembling snow, fell. Dr. says it looked more like a snow - storm than anything he has ever before seen at this place. It lasted but a few minutes and then ceased. (T.S.R. 37. 2 P.M. 54. S.S. 44.) Mar. 18. Thursday. Augusta has been here most of the afternoon, and will remain here over night Susan has come home from school feeling quite unwell, and took immediately to her bed. Mr. Walker has made us a call. He says that Mr. Thomas Wiley and Miss. Shackford rode past his schoolhouse today on their way from Sacramento to Stockton. (T.S.R. 34. 2 P.M. 60. S.S. 57.) Mar. 19. Friday. This morning, we had such a heavy frost that we fear it has killed all the peach-buds, so that we shall have no peaches. Susan has not taught school today, but has been in bed nearly all the time. This afternoon, Dr. Luther and myself have