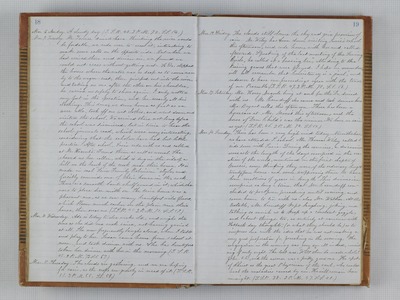 Mar. 8. Monday. A cloudy day. (T.S.R. 42. 2 P.M. 72. S.S. 64.) Mar. 9. Tuesday. Mr. Turner dined here. Thinking the river would be fordable, we rode over to cross it, intending to make some calls on the opposite side. But when we had arrived there and driven in, we found we could not cross without getting wet. So Dr. stopped the horses where the water was so deep as to come nearly to the wagon-seat, then jumped out into the river, and taking us one after the other on his shoulder, he carried us safely to shore again. I only wetted my feet in the operation, and he nearly all his clothing. This done, we drove home as fast as we were able, took off our wet clothes, and went down and visited the school. We arrived there not long before the school was dismissed, but in time to hear the school journals read, which were very interesting, considering that the scholars have had but little practice. After school, Susie rode with us and called at Mr. Vincent's. Found them as well as usual. She showed us her cellar, which is dug in the side of a hill on the bank of the creek near their house. It is made in real "Swiss Family Robinson" style, and forcibly reminds one of their house in the rock. There is a smooth bank shelf round in it, which she uses to place her milk on. The drive home was a pleasant one, as we saw many beautiful wild flowers, which bloom much earlier on the plain near their house, than near us. (T.S.R. 45. 2 P.M. 70. S.S. 59.) Mar. 10. Wednesday. Ada is today. twelve weeks old, and weighs the same as she did one weak since, not having gained at all. She now frequently laughs aloud, when I talk and play to her. Susan came home from school at noon, and took dinner with us. She has here to fore taken her dinner with her in the morning. (T.S.R. 45. 2 P.M. 73. S.S. 67.) Mar. 11. Thursday. The clouds are gathering, and we are hoping for rain, as the crops are greatly in need of it. (T.S.R. 51. 2 P.M. 65. S.S. 58.) Mar. 12. Friday. The clouds still obscure the sky and give promise of rain. Mr. Wiley has been down visiting Susie's school this afternoon, and rode home with her and called afterwards. Speaking of the last meeting of the Sewing Circle, he called it a bussing bee," alluding to the kissing games that were played. I hope our members will all remember that "Consistency is a jewel," and endeavor to have our proceedings agree with the tenor of our Preamble. (T.S.R. 49. 2 P.M. 70. S.S. 60.) Mar. 13. Saturday. Mr. Henry Megerle being at work for the Dr. dined with us. Mr. Carnduff also came and took dinner here. Mr. Bryant called this afternoon. There has been a horse race at Mr. Moore's this afternoon, and the horse of Dan. Child's was the winner. We have no rain as yet. (T.S.R. 46. 2 P.M. 72. S.S. 60.) Mar. 14. Sunday. There has been a very high wind today. Nevertheless, we have attended S. school. Mr. Thomas Wiley called to ride down with Susie. During the exercises, a discussion arose as to the length of the days occupied in the creation of the world, mentioned in the first chapter of Genesis, some thinking they were of the ordinary length twenty four hours - and some supposing them to have been millions of years in length. This discussion occupied so long a time, that Mr. Carnduff concluded to postpone preaching until evening, and came home to tea with us - also Mr. Walker. At the tea-table, Mr. Carnduff kept laughing, joking, and talking so much as to keep up a constant giggle, and about things, too, so entirely at variance with Sabbath day thoughts, (or what they should be) as to impress one with the idea that he was not making a very good preparation for preaching in the evening. The congregation in the evening was very small indeed, consisting of only eight. The text was, "Will thou be made whole?" John. 5.6., and the sermon was a pretty good one. He spoke of Christ as the great Physician of the soul, who could heal the maladies caused by sin. He will remain here overnight. (T.S.R. 38. 2 P.M. 57. S.S. 48.)