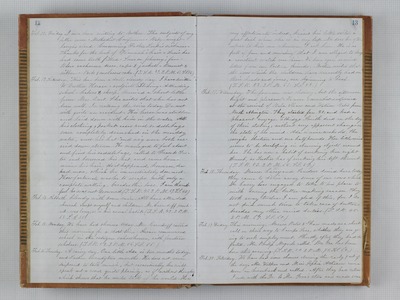 Feb. 12. Friday. I have been writing to Mother. The subjects of my letter were - Methodist Conference - Baby – weight - laughs aloud - Concerning Father Locke's sickness - Thanks for the lock of Hannah's hair - Susie has had some teeth filled - Sores on Johnny's face - Blue cashmere dress, cape & jackets - Bonnet & ribbon - Pork & molasses cake. (T.S.R. 39. 2 P.M. 61. S.S. 56.) Feb. 13. Saturday. This has been a dull, cloudy day. I have written to Brother Horace, subjects – Sliding - Attending school - Calves & sheep. Received a short letter from Mrs. Burt. She writes that she has not been well. In crossing the river today, Dr. met with quite an accident. His horse was stubborn and laid down with him in the water. All his clothing, pocket cases and saddle bags were completely drenched in the muddy water, and his hat and wig were both carried down stream. He managed to feel about and find his saddlebags, called to Frank Foster and borrowed his hat, and came home minus his hair. As it happened, however, he had more, which he immediately donned. How fortunate was he to escape with only a complete wetting, besides this loss. I am thankful he was not drowned. (T.S.R. 41. 2 P.M. 59. S.S. 48.) Feb. 14. Sabbath. Cloudy with some rain. All have attended church except myself and children. Mr. Carnduff preached was long, as is his usual habit. (T.S.R. 42. 2 P.M. 58. S.S. 55.) Feb. 15. Monday. We have had showers today. Mr. Carnduff called this morning for a short time. Susan commenced school in the octagon schoolhouse, with fourteen scholars. (T.S.R. 52. 2 P.M. 56. S.S. 56.) Feb. 16. Tuesday. A rainy day. Our little Ada is two months today, and Luther twenty two months. He does not seem disposed to talk much, but occasionally he will speak out a word quite plainly, as if without thought, which shows that he could talk if he would. He is very affectionate indeed, kisses his little sister a great deal when she is in my lap. Nor does he often refuse to kiss me whenever I ask him. He is so full of fun and mischief that I am obliged to keep a constant watch over him. We have again received letters from our Eastern friends. Mother writes that the sores which the children have recently had on their heads and faces, are beginning to heal. (T.S.R. 52. 2 P.M. 61. S.S. 58.) Feb. 17. Wednesday. The forenoon was showery, but the afternoon bright and pleasant. We were somewhat surprised at the arrival of Bela Shaw and Watson Bates from North Abington. They started Jan. 20. and had a pleasant voyage. Elbridge Smith died on the day of their starting, without any apparent change in the state of his mind. Ada is nine weeks old. She weighs thirteen and one half pounds. Her little mind seems to be developing in observing objects around her. She has now a habit of sucking her right thumb, as Luther has of sucking his left thumb. (T.S.R. 53. 2 P.M. 65. S.S. 59.) Feb. 18. Thursday. Messrs. Curry and Sanders dined here today. They came to drive away some of our cows which Mr. Curry has engaged to take to his place to milk during the butter - making season. They took away twelve. I am glad of this, for I do not find much time to take care of butter, besides my other varied duties. (T.S.R. 45. 2 P.M. 69. S.S. 60.) Feb. 19. Friday. This morning, Messrs. Bates & Shaw made us a short call on their way to Camps Sees, whither they are going to seek employment. Shortly after they had departed, Mr. Philip Megerle called. Bro. Geo, has been here this evening. (T.S.R. 50. 2 P.M. 75. S.S. 62.) Feb. 20. Saturday. We have had some showers during the early part of the day. Mr. Walker and Miss Sophia Athearn came down on horseback and called. After they had retired I rode with the Dr. to Mr. Gove's store and made some