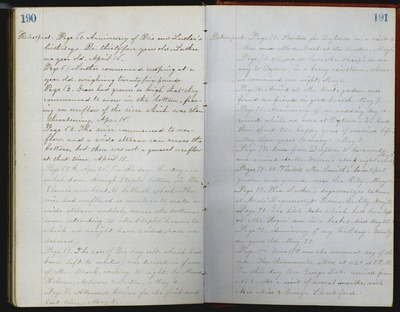 Retrospect. Page 60. Anniversary of Dr.'s and Luther'sbirthdays. Dr. thirty four years old, Lutherone year old. April 16.Page 61. Luther commenced creeping at ayear old, weighing twenty five pounds.Page 62. Grass had grown so high that theycommenced to mow in the bottom, fearingan overflow of the river which was thenthreatening, Apr. 16.Page 62. The river commenced to overflow,and a wide stream ran across thebottom, but there was not a general overflowat that time, April 18.Page 65th. Apr. 26. On this day Sunday. Wesailed down through Staples bottom in Bro.Elmer's new boat, to Sabbath school. Theriver had overflowed so much as to make awide stream entirely across the bottom,even extending to Mr. Staples' house, towhich we might have sailed, had wedesired.Page 69. The case of Dr's bay colt, which hadbeen left to arbiters, was decided in favorof Mr. Brock, contrary to right, by Messrs.Holman, Athearn & Barton, May 4.Page 71. Attended Circus for the first andlast time, May 5.Retrospect. Page 72. Started for Drytown on a visit toMr. and Mrs. Burt at the Garden, May 6.Page 73. Stopped at Rev. Mr. Sharp's on ourway to Drytown, in a heavy rainstorm, wherewe remained over night, May 6.Page 74. Arrived at Mr. Burt's garden, andfound our friends in good health, May 7.Page 75. Anniversary of our wedding day occurredwhile we were at Drytown. We hadthen spent two happy years of married life.May those years be many. May 8.Page 78. Rode from Drytown to Sacramento,and arrived at Mr. Warren's about eight o'clock. May. 9.Pages 78-80. Visited Mr. Smith's beautifulgarden and grounds, near Sac. City, May 10.Page 80. Had Luther's daguerreotype taken,at Beals' Daguerreotype Rooms, Sac. City, May 11.Page 90. The little babe which had been leftat Mr. Rogers' door in a basket, died May 28.Page 92. Anniversary of my birthday - twentyone years old, May 30.Page 100. June 17th was the warmest day of theyear. The thermometer stood at 112o at 2 P.M.On this day Bro. George Locke arrived fromN. E. after a visit of several months, withMrs. Miss & George Shackford.