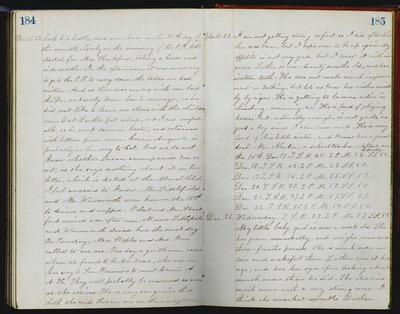 Dec. 16-22. both his little ones were born on the 16th day ofthe month. Early on the morning of the 17th, Robt.started for Mrs. Shackford, taking a horse andside-saddle. In the afternoon, it was necessaryto go to the P. O. to carry down the letters we hadwritten. And as there was no one with me butthe Dr. we hardly knew how to manage, as hedid not like to leave me alone with the children.But Luther fell asleep, and I was comfortable,so he went down in haste, and returnedwith letters from home. Cousin Augusta isprobably on her way to Cal. but we do notknow whether Susan accompanies her ornot, as she says nothing about it in herletter, which is dated at the Normal School.I feel anxious to know. Mr. Littlefieldand Mr. Wurmonth were here on the 18thto dinner and supper. Robert and Mrs. Shackfordarrived soon after noon. Messrs. Littlefieldand Wurmonth dined here the next day.On Sunday, Mrs. Staples and Mrs. Govecalled to see me. One day, a gentleman camewhom we found to be Mr. Read, who was onhis way to San Francisco to meet Cousin A.A. H. They will probably be married as soonas she arrives. He is very sanguine thatboth she and Susan are on their way here.Dec. 16-22. I am not getting strong as fast as I did after Lutherwas born, but I hope soon to be up again. Myappetite is not very good, but I trust it will improve.Luther is now twenty months old, and hassixteen teeth. He does not make much improvementin talking, but lets us know his wishes mostlyby signs. He is getting to be more active inclimbing, running, etc. He is fond of playinghorse, but, naturally enough, is not quite sogood a boy since I have been sick. He is veryfond of his little sister, and kisses her a greatdeal. Mr. Newton, a school teacher, called onthe 16th.Dec. 17. T.S.R. 45. 2 P.M. 52. S.S. 50. Cloudy.Dec. 18. T.S.R. 42. 2 P.M. 52. S.S. 50.Dec. 19. T.S.R. 35. 2 P.M. 55. S.S. 50.Dec. 20. T.S.R. 33. 2 P.M. 53. S.S. 50.Dec. 21. T.S.R. 37. 2 P.M. 57. S.S. 50.Dec. 22. T.S.R. 35. 2 P.M. 54. S.S. 50.Dec. 23. Wednesday. T.S.R. 29. 2 P.M. 57. S.S. 50.My little baby girl is now a week old. Shehas grown remarkably, and weighs nine andthree - fourths pounds. She is much more activeand wakeful than Luther was at herage, and has her eyes open looking aboutmuch more than he did. She also criesmuch more with a very strong voice. Ithink she somewhat resembles Luther.