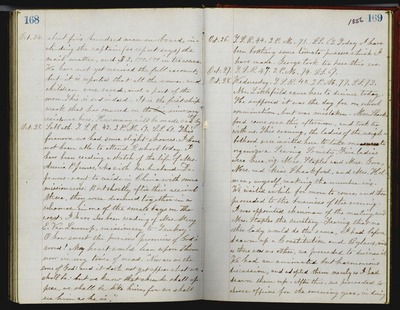 Oct. 24. about five hundred men on board, includingthe captain (so report says) themail matter, and $2,000,000 in treasure.We have not yet received the full account,but it is reported that all the women andchildren were saved, and a part of themen. This is sad indeed. It is the first shipwreck that has occurred on the line since myresidence here. How many will be made sad by itOct. 25. Sabbath. T.S.R. 43. 2 P.M. 69. S.S. 61. Thisforenoon we had some slight showers. I havenot been able to attend S. school today. Ihave been reading a sketch of the life of Mrs.Annie P. James, who with her husband - Dr.James - went to reside in China with somemissionaries. But shortly after their arrivalthere, they were drowned together in aschooner in one of the small bays on thecoast. I have also been reading of Mrs. MaryE. Van Lannep, missionary to Turkey.O how sweet the precious promises of God'sword! My heart would lean upon themnow in my time of need. "Now are we thesons of God; and it doth not yet appear what weshall be; but we know that where he shall appear,we shall be like him, for we shallsee him as he is."Oct. 26. T.S.R. 44. 2 P.M .71. S.S. 63. Today I havebeen bottling some tomato preserve which Ihave made. George took tea here this eve.Oct. 27. T.S.R. 47. 2 P.M. 74. S.S. 67.Oct. 28. Wednesday. T.S.R. 40. 2 P.M. 77. S.S. 73.Mr. Littlefield came here to dinner today.He supposed it was the day for our schoolexamination, but was mistaken. Mrs. Shackfordcame over this afternoon, and took teawith us. This evening, the ladies of the neighborhoodwere invited here to take measures toorganize a Sewing Society. Five ladieswere here, viz. Mrs. Staple and Mrs. Gove,Mrs. and Miss Shackford, and Mrs. Holman,myself making the number sixWe waited awhile for more to come, and thenproceeded to the business of the evening.I was appointed chairman of the meeting, andMrs. Staples the secretary. Fearing that noother lady would do the same, I had beforedrawn up a Constitution and Bylaws, andas there was no other, we proceeded to discuss it.We had an animated but harmoniousdiscussion, and adopted them nearly as I haddrawn them up. After this, we proceeded tochoose offices for the ensuring year, in doing