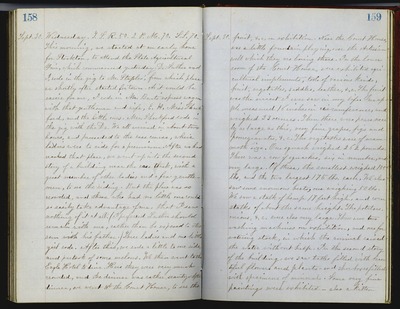 Sept. 30. Wednesday. T.S.R. 50. 2 P.M. 90. S.S. 70.This morning, we started at an early hourfor Stockton, to attend the State AgriculturalFair, which commenced yesterday. Dr. Luther andI, rode in the gig to Mr. Staples', from which placewe shortly after started for town. As it would beeasier for me, I rode in Mr. Burt's express wagonwith that gentleman and wife, E. H, Miss Shackford,and the little ones. Mrs. Shackford rode inthe gig with the Dr. We all arrived in about twohours, and proceeded to the race course, whereladies were to ride for a premium. After we hadreached that place, we went up into the secondstory of a building near the race track, with agreat number of other ladies and a few gentlemen,to see the riding. But the place was socrowded, and those who had no little one couldso easily take advantage of me, that I sawnothing of it at all. (I preferred Luther shouldremain with me, rather than be exposed to thesun with his father.) Three ladies and one littlegirl rode. After this, we rode a little to one side,and partook of some melons. We then went to theEagle Hotel to dine. Here they were very muchcrowded, and the dinner was rather scanty. Afterdinner, we went to the Court House, to see theSept. 30. fruit, etc. on exhibition. Near the Court House,was a little fountain playing, over the Artesianwell which they are boring there. In the lowerroom of the Court House, were exhibited agriculturalimplements, tools of various kinds,fruit, vegetables, saddles, leather, etc. The fruitwas the nicest I ever saw in my life. One applemeasured 16 inches in circumference, andweighed 33 ounces. Then there were pears nearlyas large as this, very fine grapes, figs andpomegranates, etc. The vegetables were of mane-mothsize. One squash weighed 262 pounds.There was a row of squashes, six in number, andvery large. Of these, the smallest weighed 155lbs, and the two largest 175 lbs, each. We alsosaw some enormous beets, one weighing 50 lbs.We saw a stalk of hemp 17 feet high, and cornstalks of about the same height. The potatoes,onions, etc. were also very large. There were twowashing machines on exhibition, and one forwatering stock, in which the animal raisedthe water without help. In the second storyof the building, we saw tables filled with beautifulflowers and plants and showboxes filledwith specimens of minerals. Some very finepaintings were exhibited - also a kitten