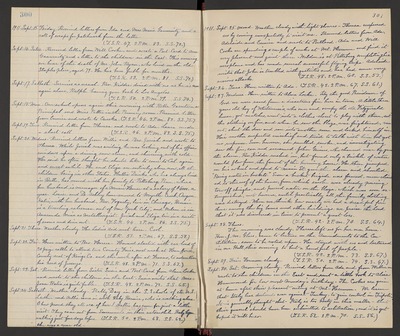 Sept. 20. Wednes. Received letters from Willie and Bro. Josiah and wrote to Theresa. While Josiah was writing he was looking out of his office windows upon a driving snow-storm, and shivering with cold. He said he often thought he should like to come to Cal. again and sweat awhile. He and Eliza are entirely alone now, all the children being in other States. Hattie Dierks who has always lived in Butte, has moved with her family to Pittsburg, Penn. where her husband is manager of a Music House at a salary of $6000. a year. Louise and Dr. Ashley have moved to Myrtle Creek, Oregon, Katie, with her husband, Rev. Fogarty, live in Chicago, Bennie is a traveling salesman out of New York City, and Nelson is in Anaconda mine as metallurgist. Josiah and Eliza live in a suite of rooms and dine out. (T.S.R. 44. 2 P.M. 86. S.S. 75.)

Sept. 24. Sabbath. Weather cloudy. Rally Day in the S. Schools of the U.S. Luther and Nellie came in with Baby Bernice, Who is walking alone. O how proud they all are of her! Nellie has come for just a little visit. They came out from Sacramento in their automobile. Baby began walking just four days before. (T.S.R. 50. 2 P.M. 68. S.S. 62.) she was a year old.

1911. Sept. 25. Mond. Weather cloudy with light showers. Theresa surprised us by coming unexpectedly to visit us. Received letters from Ada, Adelaide and Eunice and wrote to Portland. Ada and Will Cooke are spending a couple of weeks at Mt. Hermon and find it very pleasant and quiet there. Weldon is at Pittsburg completing his aeroplane and has made several successful flying trips. Adelaide writes that John is troubled with gastritis and has had some very serious attacks. (T.S.R. 48. 2 P.M. 60. S.S. 53.)

Sept. 27. Wednes. Have written to Alma Locke. By the good Providence of God we were saved from a disastrous fire here in town. A little three years old boy of Whitmeiris, who own and occupy the old Fitzgerald house, got matches, went into a clothes-closet to play with them, set the clothing on fire, and when he saw the blaze, was frightened, ran out, shut the door and ran into another room and locked himself in His mother suspected mischief and tried to talk with him but got no response. Soon, however, she smelled smoke, and investigating saw the fire, ran and screamed. John Grimes, who chanced near by gave the alarm, Rev. Kidder rushed in, but found only a trickle of water would flow from the faucet of the burning house. He there jumped on his wheel and speed to main St. gave the alarm and shouted, "Bring water in buckets." Soon a bucket brigade was formed, mere climbed to the roof of the house, from which smoke was already pouring, two off shingles, and poured water on the blaze, which was soon extinguished, not however, until practically all the family clothing was destroyed. When we think how nearly we had a dreadful fire there among the big barns and other buildings, we praise the Lord that it was discovered in time to prevent a great loss. (T.S.R. 47. 2 P.M. 70. S.S. 64.)

Sept. 30. Sat. Morning cloudy. Received letters from Ada and from Willie and wrote to the children in the East and sent a little book to Alice Hammond for her next Monday's birthday. The Cookes are gain at home after their pleasant outing at Mr. Hermon. We learn that Italy has declared war against. Turkey, to gain control in Tripoli. It is generally thought that Italy is too hasty in this matter - that their general should have been submitted to arbitration, and it is yet hoped it will be so. (T.S.R. 52. 2 P.M. 70. S.S. 56.)