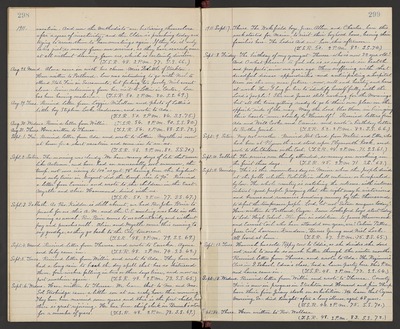 1911. vacation. And now the Methodists are bestirring themselves after a year of inactivity, and the Elder is preaching today and trying to arouse them to have meetings again. If they do, it only takes just so many from our services, as they have scarcely none at all without drawing from us, which is certainly divisive. (T.S.R. 48. 2 P.M. 77. S.S. 66.)

Aug. 28. Mond. Alma came in with her chum - Miss Dolittle of Stockton. Have written to Portland. Low was intending to go with Niel to attend State Fair in Sacramento, but feeling too poorly, Niel went alone. Since returning from her visit to Lottie in Exeter, Low has been having malaria. (T.S.R. 50. 2 P.M. 80. S.S. 69.)

Sept. 2. Satur. The morning was cloudy. We have many days of late that seems like Autumn, and have had an unusually cool summer, the temp, not once rising to 100- as yet, 98- having been the highest and only twice in August did the temp. rise to 90-. Received a letter from Eunice and wrote to the children in the East. Myrtle and Alice Hammond dined with us. (T.S.R. 50. 2 P.M. 77. S.S. 67.)

Sept. 3. Sabbath. As Rev. Kidder is still absent, we had Rev. John Brier to preach for us this A.M. and the C.E. meeting was held in the evening as usual. Rev. Brier comes to us voluntarily and without pay and preaches well. Alice and Myrtle came this evening to say goodbye, as they go back to the City tomorrow. (T.S.R. 48. 2 P.M. 79. S.S. 69.)

Sept. 5. Tues. Received letter from Willie and wrote to Ada. They have now had a long rain to break the dry spell that has so distressed them, four inches falling in two or three days time, and now report sunshine again. (T.S.R. 48. 2 P.M. 73. S.S. 65.)

Sept. 6. Wednes. have written to Theresa. We learn that to Mr. and Mrs. Sol Strobridge came a little son at an early hour this morning. They have been married some years and this is the first child, so there is great rejoicing. He has been chief clerk in Bruml's store for a number of years. (T.S.R. 48. 2 P.M. 78. S.S. 69.)

Sept. 8. Friday. The birthday of my youngest - Theresa - who is now 32 yrs, old! And O what pleasure to feel she is so improved in health and prospects since one year ago. Then suffering with that dreadful disease - appendicitis - and anticipating a hospital term in the very near future - now, well and hearty and hard at work. How I long for her to identify herself fully with the Lord's people! She and James still working for the Mornings but all the time getting ready to go to their own place on the opposite side of the way. May the Lord bless them in bringing their hearts more closely to Himself! Received letters from Ada and Will Cooke and Eunice and wrote a birthday letter to Brother Josiah. (T.S.R. 52. 2 P.M. 82. S.S. 66.)

Sept. 11. Monday. This is the momentous day in Maine when the people decide at the polls whether Prohibition shall continue or be repealed by law. The whole country is watching the outcome with intense interest - good people praying that the right may be victorious and brewers and rummies sending money by the thousands to defeat the temperance people. Lord, let not Satan conquer today! Have written to Portland, Oregon. Seven Lockeford boys start today to Lodi High School. The five in addition to James Hammond and Earnest Coil who have attended one year, are! Calvin Pattee, Jesse Coil, Lawrence Knudsen, Burres Young and Niel Locke. All board at home. (T.S.R. 47. 2 P.M. 75. S.S. 65.)

Sept. 12. Tues. Hannah has sold Poppy cow to Eddie, as she decided she does not wish to make so much butter through the winter months. Received letter from Theresa and wrote to Ada. The Beginners" Class in S. School, Edna's class, had a lawn party here this P.m. and Laura came in. (T.S.R. 48. 2 P.M. 73. S.S. 64.)

Sept. 13. Wednes. Received letter from Willie and wrote to Theresa. County Fair is now in progress in Stockton and Howard and Jim Thorp have their fine Jersey stock on exhibition. we learn that Cyrus Moreing, Sr. died tonight after a long illness, aged 68 years. (T.S.R. 44. 2 P.M. 75. S.S. 70.)