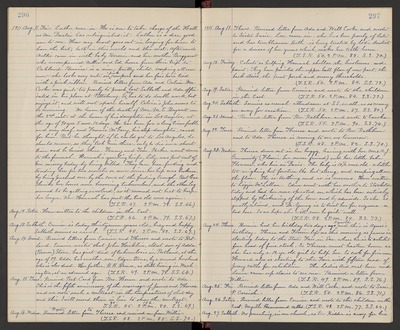 1911. Aug. 11. Fri. Luther came in. He is now to take charge of the Hall as Mr. Dustin has relinquished it. Luther is a dear, good son to me. How my heart goes out in longing for him to have the best, both in this world and the next. After wards Nellie came in with baby Bernice and the mother Bergquest who accompanied Nellie and Ed. home from their trip to Oakland. Bernice is a nice, pretty child, creeping all over now - she looks very cute in pink rompers and her fair hair tied with a pink ribbon. Received letter from Ada and Calvin. Mr. Cooke was quite too poorly to preach last Sabbath and Ada officiated in his place at Pittsburg. So Ada has to do double work, but enjoys it, and will not spare herself. Calvin's John seems to be recovering. We learn of the death of Mr. M.E. Bryant on the 2nd inst, at the home of his daughter in Los Angeles, at the age of 90 yrs. 5 mos. 12 days. He has been for a long time feeble and very deaf, and Fannie McGray, his step-daughter, cared for him. But he thought, if he could get to Los Angeles, he should recover, so they took him there, only to die in a short time and be buried there. Fanny and Tom. Parker went down to the funeral. Hannah's yearling heifer, Lily, was put out of her misery today by being killed. They have been feeding and tending her for two months or more since her hip was broken by being pushed over by the cows at the feeding trough. But Geo. thinks her bones were becoming tuberculosis, and the other leg seemed to be getting involved, so it seemed not best to keep her longer, Now Hannah has just the two old cows again. (T.S.R. 47. 2P.M. 78. S.S. 66.)

Aug. 14. Mond. Received letter from Eunice and Theresa and wrote to Portland. Eunice writes that John Hicklin, eldest son of Ada (Brown) Stone, has just died of tuberculosis in Portland, at the age of 29. Ada has another son, Edgar Stone, by a second husband who is also dead. Her father, H.H. Brown, is still living in Washington, at an advanced age. (T.S.R. 49. 2 P.M. 78. S.S. 64.)

Aug. 23. Wednes. Theresa drove out in her buggy, having with her Mrs. A.J. Gaumnitz (Flossie her nurse friend) and her little babe. Florence, who live in Davis. The baby is 10 1/2 mos, old - a little tot weighing but fourteen lbs. but strong, and creeping all over the floor. She is teething and so is nervous. Have written to Lizzie McLellan. Edna went with her mother to Stockton today and had her nose operated on, which has been entirely stopped by thickening of the bone and by adenoids. So she is greatly relieved, and Dr. Young is to treat her for eczema - a bad case. So we hope she will soon be quite well. (T.S.R. 48. 2 P.M. 84. S.S. 73.)

Aug. 24. Thurs. Bernice had her birthday two days ago 11 yrs. old and this is Agnes's birthday. Theresa and Flossie left us this morning as James is starting today to the State Fair in Sac. where he is to exhibit four head of fine stock. So Theresa must hasten home as she has only a 12 yr. old girl to help her to cook for five men. Howard also is starting to the Fair with fifteen head of Jersey cattle for exhibition The Ladies Aid wet here and Laura came up stairs to see me. Received a letter from Willie. (T.S.R. 49. 2 P.M. 89. S.S. 76.)

Aug. 27. Sabbath. No preaching in our church, as Rev. Kidder is away for his